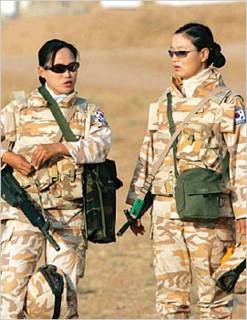 South Korean soldiers fashionable as ever...

Here is a shot of the South Korean forces near Irbil, Iraq (Picture is from a South Korean newspaper). South Korea will ultimately have some 3600 troops in Iraq, making it the third biggest contributor to the international forces after the U.S. and U.K.

One note here is the very fashionable look of the soldiers. One comment from a Korean lady who saw this was that Korean women won't go anywhere without make-up on, except perhaps to exercise.

The Korean forces have been threatened several times by various groups, most of which are never heard from again. But al Qaeda #2, Ayman al-Zawahiri, has specifically listed South Korea as a target due to its contribution to the Iraqi forces, even if South Korean forces remain in the Kurdish areas of the northern part of Iraq, and made it a stipulation of their deployment that they not be under the command of the U.S. forces.

The decision to deploy to Iraq remains unpopular, but President Roh managed to ride out the beheading of a South Korean civilian, and will continue to ride out opposition to this. For Roh, this is about much more than Iraq, it is about the future of a more independent South Korean defense force.

Hi I love this picture ... I live in S Korea too for the moment - your blog contains some good stuff.