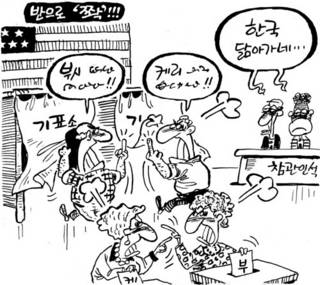 Cartoon from the Chosun Ilbo, likening the severe partisanship in the United States this election cycle to the frequent political situation in Korea.

During the 2000 election, I was given strict orders by my Mother-in-Law to vote for Gore, and not for “Bushie.” At the time, many Koreans (particularly those from Cholla) were concerned about the prospects of a Bush win, and when Bush did win, and instantly took a hard-line stance on North Korea, they felt vindicated in their concerns. The perceived unilateralism of the Bush administration in the wake of the Sept. 11 attacks only solidified this view. And the rapid decision to reduce and relocate U.S. forces in Korea compounded the level of concern with Bush (even if anyone who was observant knew a U.S. force restructuring was long in coming).

So heading into the 2004 election, it was a no-brainer that the advice would once again be to vote against Bush. Heck, during a visit to Kwangju earlier this year for the May 18 memorials, they even had a George Bush in a cage that kids could throw beanbags at and adults could poke with a stick.

But all that was before the Presidential debates, and Kerry’s two key comments. First, Kerry said one of his top priorities would be counter-proliferation – and he pointed to North Korea, which he said acquired nuclear weapons while Bush was distracted in Iraq. Second, he said that Washington would restart bilateral talks with North Korea, rather than outsourcing to China. Now, fact checking aside, these comments raised some eyebrows in Seoul.

In essence, Kerry, who was initially seen as someone who would be more likely to follow along with the “Sunshine Policy” and “Policy of Peace and Prosperity,” was now seen as someone who would quite likely take an even tougher approach on North Korea than Bush. At least the core of Bush’s policy was to ignore Pyongyang’s toothless growls; Kerry may well need to demonstrate his strength and resolve and make an example of North Korea in his quest to battle proliferation of nuclear materials, other potential WMD, and delivery systems like missiles.

But even if he decided NOT to take action against Pyongyang (by choice or advice), Kerry’s other comment, that on bilateral talks, is just as troubling. Seoul fought long and hard to be included in the decisions and paths toward dealing with its Northern neighbor, and while no one believes the six-party talks are the best thing out there, they at least give Seoul an influential place at the table. If Kerry reverts to a bilateral approach, Seoul is left out in the cold once again, with little leverage.

So now Korea is conflicted. The results of the U.S. presidential election – at least in the polls – are too close to call. Both the ruling and opposition parties are preparing contingencies for whomever wins, and both sides are apparently as split as they are from each other over who the best candidate is for Korea (even if it IS a U.S. election, and the Koreans themselves have little involvement or influence). For South Korea, the U.S. elections will impact economic, political and security cooperation – and potentially confrontation – with Washington.

And sitting impotent at the other side of the world leaves them even more frustrated and insecure than usual.