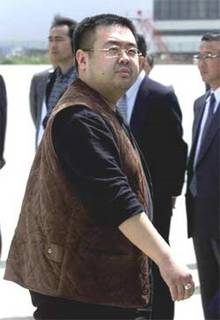 Everyone’s (well, at least MY) favorite Dear-Leader-to-be Kim Jong Nam has gotten an early start on his Christmas cards this year, according to the Japanese press. The younger Kim was thought at one point to be first in line to succeed his father Kim Jong Il, son of Kim Il Sung, dynastic founder of the Democratic People’s Republic of Korea. That is, until his little embarrassment in May 2001, when he was picked up in Japan for illegal entry while trying to go to Disney.

Well, the Fat Bear (Pang Xiong was his false name on his passport back in 2001, a humorous play on his rolly-pollyness) has now sent a Christmas email to several Japanese media folks he accidentally met back in September in an airport in Beijing. The greeting, sent from a Yahoo Korea account and written in Hangul, read:

“Hello, I am Kim Jong-nam. I was glad to meet you all at Beijing International Airport on September 25. The season's-end is near and the New Year is approaching. I wish you all good health and happiness. December 3, Kim Jong-nam.”

Takashi Uemura, a reporter for the Asahi Shimbun, replied to the Kim e-mail:

“Where are you now? I would like to meet you again.”

To which he received the cryptic reply:

“I am not in a position to clearly answer what you want to ask. I just sent the greeting as I was given a name card.”

Now, all this is quite pleasant. I mean, here we have someone thought to be the son of the leader of one of only two Axis of Evil members, sending out holiday greetings to folks he met only briefly at the airport a few months ago. Now, if only Washington would let North Korea alone, perhaps the eventual succession from Kim Jong Il to Kim Jong Nam would solve everything.

And remember, if you ever meet a dictator-in-waiting at the airport, always err on the side of manners and exchange a card, and perhaps share a spot of tea and some biscuits. You never know whose Christmas card list you may end up on.