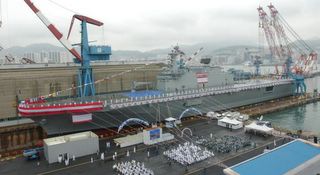 The launching of the LPX Dokdo in Pusan July 12, 2005. (Photo from Korean Ministry of National Defense)

The South Korean Navy July 12 launched the Dokdo, a 13,000-ton multipurpose “LPX : Amphibious Ship Transport New Designs” that will serve as both landing and air operations. In effect, it is a light helicopter carrier, carrying some 700 troops, 10 CH-60 Seahawk helicopters, six tanks, seven amphibious vehicles and two landing boats. It is a little smaller than a U.S. Tarawa-class LHA, used by the Marine Expeditionary Units for rapid deployment in disaster and contingency operations.

Korea is not alone in the development of helicopter carriers in Asia. In 2000, Japan quietly approved the creation of two new “helicopter destroyers” (DDH), each around 13,500-tons, to come into service before 2010. The flat tops would be helicopter carriers, rather than the current destroyers with rear-deck helicopter pads, capable of carrying large numbers of evacuees below decks – or of course carrying troops to a contingency. While Japan’s constitution kept the terminology cryptic, it is obvious Tokyo, too, is preparing for a more active role in regional contingencies, both near and on-shore.

This turns attention to China, which has recently restarted work on the old Russian Varyag, which sits in dry-dock in Dalian after a long journey from Ukraine toward an ostensible destination as a casino in Macao (never happened, though). It is unlikely Beijing is planning to float the Varyag as a fleet carrier – the cost is too prohibitive to float a status symbol, and without at least two other carriers, the Varyag serves more of a PR role than an effective military vessel. Whether the Varyag will end up a casino or a military museum – or will be re-floated and sold abroad or used for near-shore landing practice is not clear.

What is clear is that there is an increased interest – and now visible action – on the deployment of helicopter carriers for regional contingencies, and that Seoul has beaten Tokyo to the punch. And Seoul’s choice of names – Dokdo – is a clear message to Japan, given the longstanding debate over the ownership of the islands.

This is great. If South Korea joins the JST (Joint Strike Fighter) project and aquires the VSTOL version, they can easily have a very potent strike carrier.