A man using the alias Kim Il Do, who claims to be a member of the North Korean Supreme People’s Assembly, defected to the South via a third country in May, 2005, according to South Korean media and government reports. The Chosun Monthly, which broke the story, said Kim was originally a South Korean who defected to the North during the Korean War and, until his defection, was affiliated with the Maritime Industries Research Center under the Second Economic Committee, which reportedly is involved in the development and sales of weaponry overseas.

Kim reportedly told South Korean intelligence that North Korea has developed a one-ton nuclear bomb, but that it is of indeterminate reliability, and that Pyongyang is actively working to produce a 500kg bomb. Pyongyang is also developing stealth mini-subs and some sort of sonar-absorbing underwater uniforms for infiltration purposes. In addition, Kim has reportedly traveled to Taiwan sometime in the past to discuss the possible sale of missiles to Taipei.

Now, it would seem on the surface that North Korea would have nothing to do with Taiwan, the arch-enemy (?) of Pyongyang’s key ally China. But North Korea and Taiwan maintain economic relations (see chart) and, in June 2002, Wang Yung-ching, Chairman of Formosa Plastics Group (FPG), traveled to Pyongyang to discuss possible investments. While little came of this specific trip (as Wang needed to carefully balance his search for cheap facilities with his relations with Beijing, which was non-too-happy with Pyongyang at the time), in October of the same year, Pyongyang and Taipei floated the idea of reciprocal economic offices in each others capitals.

But perhaps most interesting, particularly in light of Kim’s revelations, was the rumored October 1998 visit by a Taiwanese National Security Bureau (NSB) team to Pyongyang to discuss the establishment of a Taiwanese listening and intelligence gathering post in North Korea and the potential purchase of missile, submarine and potentially nuclear technology. The unconfirmed reports, in Hong Kong’s Yazhou Zhoukan, certainly raised a lot of eyebrows at the time, and now may find some backing. 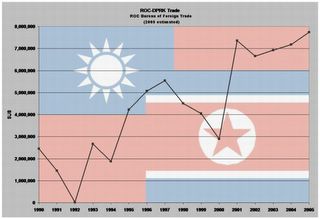