The fourth round of the Six Party nuclear talks has stalled as it began – or at least that is the impression being given from Beijing. Pyongyang apparently opened the talks with the demand that the U.S. supply light water nuclear reactors and Washington said “NO.”

Now, it is somewhat unclear if these are supposed to be new reactors, or the KEDO reactors [seen in this image from 2002] that were never completed, but North Korea’s delegation knew before going into the talks that this would be a non-starter. While U.S. President George W. Bush made it a point to say Washington recognizes every country has the right to a civilian nuclear program (he was talking more specifically about Iran, but the message was to both), it doesn’t mean Washington really wants these nations to have programs. 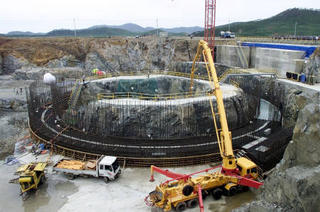 Furthermore, even the South Koreans noted that North Korea’s civilian program wouldn’t come until after the North had dismantled its existing programs and regained the trust of the international community via participation in inspection regimes. Christopher hill also noted that Washington didn’t see why the North needed a program, and that his first task was to ensure the dismantlement of the current program before talking about anything coming next.

Russia, which suggested the possibility of nuclear reactors in North Korea, doesn’t support any immediate new construction, and neither does China. And there is little need to ask Japan what it thinks, because the answer is obvious.

Given that the North Korean negotiators are not stupid, it must be assumed that they know that their current demand will not be met. So what are they doing? Do they want to tank the talks? Or is this just one more bargaining chip? Something to distract the masses while they wait to ask for increased money or something else? Or are they just stalling for time?

Pyongyang ultimately wants security, and it sees that as coming through diplomatic ties with the United States. Condoleezza Rice has suggested this is ultimately possible. There is plenty of room for compromise, particularly as Washington wants to be able to put this particular crisis behind it, given the troubles with Iraq, Iran and Katrina.

Thus, a "breakthrough" is likely, but not right away. Obviously Pyongyang is playing hard to get. It wants to dominate and control the talks. And it may be doing this to demonstrate that it is not a tool of Beijing or Moscow (despite the notable presence of the Russian and Chinese embassy staff at the departure of the North Korean negotiating delegation from Pyongyang to Beijing).
at 12:34:00 AM