Changes in the Wind? 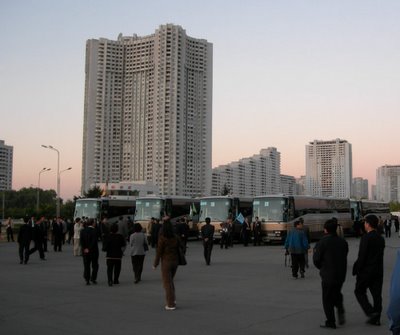 In 2005, then, a total of 385,275 South Koreans, or nearly 0.9 percent of the population, visited North Korea. In some senses this is a tiny number, but in others this is massive. North Korea is no longer the evil ever-present danger just across the heavily fortified (and obviously mis-named) Demilitarized Zone. It is, instead, a destination for tourism. Whether this is due to a nostalgia for the ancestral homeland, a sense of flaunting leftist values or simply the excitement of visiting the evil twin Korea, Southerners are heading North. 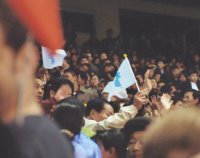 For Pyongyang, this is a significant development. First and foremost, it means cash. Cash from Hyundai for running Kumgang, cash from tourist dollars, cash from the bus trips into Pyongyang, cash from souvenir hunters (I have seen these South Korean tourists buy up every copy of North Korean cartoon videos, "pop" music and books)... in general it brings money (so Pyongyang can print fewer U.S. hundred dollar bills perhaps?).

But it also helps to bring about the change in attitude in the South. Just as Kim Jong Il's appearance at the airport to meet then President Kim Dae Jung on his 2000 visit to Pyongyang, and the Northern leader's very obvious deference to his elder, the tours to the North alter the impression of the nation. Rather than being an unknown (and therefore feared) entity, it becomes seen and known. Having been there, there is an unavoidable sense of sympathy for the people that builds during the visit. It comes from observation of the buildings, the populace, the general mood of the place.

And this is something Pyongyang loves. It stirs confusion in the South between the formerly entrenched conservative political forces and the liberal voices. It creates a sense of brotherly desire - and duty - to help, to protect, and to bring back into the family fold. And this adds to the rift between Seoul and Washington, creating tensions that offer Pyongyang even more maneuvering room internationally.

In the end, though, Pyongyang will find that it also exposes the north to South Koreans, no matter how carefully controlled and monitored the visitors may be. There are opportunities for observation, the occasional short exchange of glances, or even of words. It isn't subversive, just revealing. But the more revealing it becomes, the more difficult Pyongyang will find maintaining the image. Already the North's leadership has swapped propaganda signs to show a single, happy, unified Korea, one seen often portrayed with flowers and smiling children's faces.

The more the image of an evil South dissipates, however, the harder Pyongyang will find it to maintain the sense of embattlement and "unfair" international isolation that keeps the regime in control. Add in the new openness to U.S. tourists (same reasons as mentioned earlier from Pyongyang's perspective) and the hold grows more tenuous.

Personal exchanges offer a way to break down barriers, to remove some of the misunderstandings between cultures and peoples and to separate the regime or "idea" of a nation from its people. Right or wrong, good or bad, it is starting to happen. The isolation bubble is slowly being penetrated - in both directions. Whether the immunity remains, the North adapts to the outside world, or a raging epidemic takes hold remains to be seen.

But the change is coming. Pyongyang still has time to draw back into its shell, but the international support mechanisms (Russia, China) are no longer as readily amenable to facilitating Pyongyang's isolation. Not today, not tomorrow, but there is a rumble, the signs of decay are evident even in Pyongyang, and change may not wait for Kim to get around to transferring power to a chosen successor. 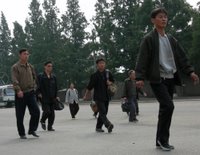 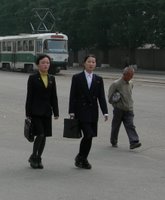