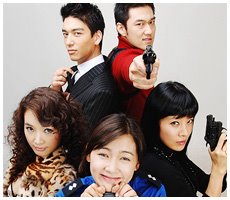 Mr. Ward may owe his reception to changing attitudes and to Korean MBC dramas. Two recent ones, Sweet Spy [Dalkomhan Seupai] and My Name is Kim Sam Soon [Nae Ireumeun Kim Sam-soon], both prominently features Korean-American actors, Dennis O'Neil (AKA Dennis Oh) and Daniel Henney respectively. Their inclusion in the dramas helped eliminate some of the stigma around the "halfs," or perhaps the stigma was lifting, and that paved the way for the dramas.

Either way, there appears a shift in attitudes, or at minimum a healthy dialogue. And that may make things easier for my son, who perhaps can follow in O'Neil and Henney's footsteps and end up on TV.
at 1:25:00 PM