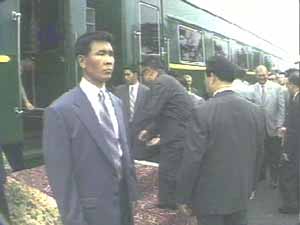 ***
South Korea's Chosun Ilbo is citing "eyewitness" reports that Kim Jong Il's personal train may have crossed the border into Russia. The reports come a day after North Korean Ambassador to Russia Pak Ui Chun was summoned to the Russian Foreign Ministry to hear Moscow's concerns over the reports of a possible North Korean missile launch. It also follows a report that Kim Jong Il on June 22 inspected a sub-unit of KPA Unit 715 "after crossing steep mountains." It is this descriptor that is particularly interesting, as it suggests the military base is in the northern part of North Korea, thus lending some potential support to the idea that he then took his train out through the northeast border crossing.

Now, there is a real question as to why Kim would leave the country at this time. He is in the midst of a psychological crisis with the world, as the Taepodong-2 sits on the launch pad at Musudan-ri. Leaving the country would seem to imply that he is either supremely confident that nothing is going to happen or he is extremely concerned that something is going to happen and he desperately needs a personal consultation. Obviously these are widely different conclusions, and raising both seems to do little to solve the mystery.

Kim rarely announces foreign travel before he leaves (an exception was his August 2002 trip to Russia, which was leaked before he left), so again, the lack of prior warning is not unusual. But the real question is why Russia? It would seem that perhaps a visit to his closer (both geographically and economically) neighbor China may be in order, as Beijing appears the country with the most to gain from a North Korean "crisis" at this time. So this Russia trip just seems a bit odd.

Now, rumors abound all the time, so it may be nothing, but this bears watching. There are reports that in 1999 Kim left his Taepodong out for some 50 days before packing it up and putting it away – and announcing a moratorium on missile tests. But the hype back then wasn't as great as it is now. Backing down seems out of character, but launching and failing is also undesirable. But back to the question at hand, one wonders why the dear leader would leave his country at a critical time. Either this story is nothing more than an overzealous "source" looking for a scoop in the Chosun Ilbo, or some seriously strange machinations are going on.