The Missile is on the Platform, But Where is Kim? 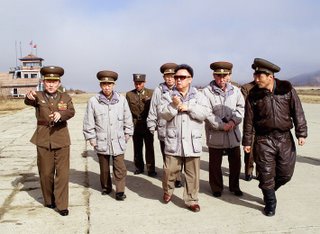 As everyone waits to see if North Korea is just playing with the spy satellites or really planning on launching, it may be instructive (or not) to look at his actions prior to the 1998 launch and now.

In 1998, as Kim was preparing to more formally take power in September, he made frequent visits throughout the country in the first six months of the year. Then came July, and Kim made just three public appearances; once to Kumsusan Memorial Palace to mark the fourth anniversary of the death of Kim Il Sung, once to inspect KPA Unit 671 and vote in the Supreme People's Assembly (SPA) elections, and once to see a performance marking the 45th anniversary of the Great Fatherland Liberation War (Korean War). In August he made just one appearance, on the third, to inspect KPA Unit 549. Then nothing until after the August 31 Taepodong launch.

This year, the situation is quite different. In May, Kim made 17 public appearances, and has already made 11 through June 19. In May, Kim made nine inspection trips to KPA units, saw five art performances, visited a pig farm and the new Pyongyang Conservatory and met with former Cambodian King Norodom Sihanouk. In June, Kim has carried out nine inspections of KPA units, visited a machine plant, and saw one art performance (June 19). Kim has been much more visible this time around.

It may mean nothing. Then again, it may signify he is much more confident this time around, or much more secure in his power. Whether he launches or not, he has certainly brought additional attention to his regime, and managed to reiterate his ability to shift the focus of the world. Good or bad, the little man can still fill the box office.
at 11:34:00 AM