To Launch or Not to Launch... 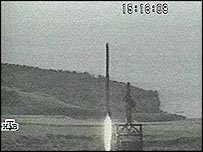 The small nub of land in North Korea's South Hamkyong province, known as Musudan-ri, has once again become the center of attention for the United States, South Korea, Japan, China, Russia and anyone else with a decent satellite. North Korea has been increasing activity at the sight of its 1998 launch of the Taepodong 1, carrying a small satellite that failed to achieve proper orbit.

Whether this new (and very visible) is a sign of an imminent test of the Taepodong 2 (believed capable of reaching Alaska or beyond in a ballistic missile configuration) or simply Pyongyang manipulating the fact that there are frequent eyes in the sky looking down on the peninsula (as Pyongyang did before with one of its nuclear facilities, creating the sense of a crisis and finally letting inspectors into what turned out to be an empty shell of a building) is now the subject of intense speculation.

If North Korea does carry out another Taepodong test, it will be the first since the August 1998 Taepodong 1 launch and the first since Pyongyang declared a self-imposed moratorium on long-range missile tests 1999, and reiterated its commitment to refrain from testing during a European visit in May 2001. In October, 2004, North Korea carried out a ground test of the Taepodong 2 engine, and in March 2005 Pyongyang declared that it was no longer bound by its moratorium, as "Dialogue between the U.S. and North Korea has been completely blocked since Bush took office in 2001."

North Korea uses threats of a new missile launch as an attention-getting device, little different than a naughty schoolchild placing a tack on their teacher's seat. Once attention is gained, Pyongyang than negotiates away the threat of imminent action in return for some benefit. Thus it inflates an imaginary crisis, and gets paid off for returning to the status quo. At the moment, Pyongyang is using the Taepodong 2 as lure to draw Washington back into the six party talks - Pyongyang will refrain from another rocket launch as long as Washington returns to the negotiating table with no preconditions and begins giving North Korea economic benefits and security assurances before Pyongyang dismantles its nuclear program. This is obviously a non-starter from Washington's point of view.

But Pyongyang has other plans in mind as well. One key thing Pyongyang is doing is testing Seoul's resolve. South Korea has already intimated that a North Korean missile test, while undesirable, would not jeopardize inter-Korean economic cooperation. Such a policy will not only stir massive infighting amongst the South Korean political parties, it will also contribute to a further division of the U.S.-South Korean paths regarding North Korea. This, for Pyongyang, is a positive thing. Keeping Washington and Seoul divided gives North Korea greater leverage and maintains the flow of economic benefits while not having to capitulate to U.S. demands.

Concurrently, a new missile launch would also trigger a response from Japan. First, it would test Tokyo's resolve to treat a North Korean launch as a military threat. Japanese officials have suggested that they view it an act of self-defense to carry out a pre-emptive strike on North Korean missile facilities if they perceive an imminent North Korean launch aimed at Japan. While the Taepodong would necessarily be launched at Japan (North Korea's many more Nodong missiles a re much better suited for a Japanese strike), the 1998 Taepodong satellite launch still over flew Japanese territory, and an accident or error could sends tons of failing rocket hurtling down on Japan.

But even if Japan did not immediately respond, it would certainly throw weight behind those in Japan advocating a complete break from the post-World War II pacifist stance and instead build a strong and active military, rather than a restricted Self-Defense Force. With the ruling Liberal Democratic Party (LDP) gearing up for the retirement of Prime Minister Junichiro Koizumi, Japan's next PM could easily be a more overt "hawk" coming on the heels of a North Korean missile launch.

This, in turn, would increase tensions between Japan and South Korea, as Seoul would perceive a threat not only from a Japan-North Korea clash but from a generally resurgent military Japan. And that, in a way, would draw South Korean and North Korean interests even closer, as both have a common distrust of Japanese intents. In addition, a rapidly re-militarized Japan (perhaps a misleading term, as Japan is currently one of the most technologically capable defense forces in Northeast Asia) would trigger a Chinese response. Tensions between Beijing and Tokyo over mutually-claimed territory in the East China Sea continues to simmer, and both Japan and China compete for the same sources of energy along the same supply routes.

For North Korea, then, the missile test - or rumors thereof - can serve many purposes. Whether a final decision to launch or not has been made remains the key mystery. However, one thing that may well play into the calculation is the weather. The monsoon season starts in Korea in the middle of next week, and the areas around Musudan-ri are already overcast. While it is certainly possible to launch through the clouds or even in the rain, North Korea needs a picture-perfect launch, and cannot have any additional risks for failure. A sunny, cloudless day seems the most likely for a launch, and Mother Nature does not seem ready to cooperate.
at 6:19:00 AM