From The Wind of May to the Forbidden Palace

I'm back in Beijing, and the sky is actually blue! I dont think on any trip to Beijing I have seen blue sky. I guess their clean-up program is working. Construction is still booming, nearly all night, but I have been told that there are no new projects to be started, and all current construction must be done by the end of 2007. One lady from Shandong jokingly noted that Beijing is seeing four years of major construction for one month of Olympic games.

I spent my last morning in Qingdao looking around and going to the main plaza across from the government building. There one can see the "Wind of May" monument, a massive red torch-like structure representing the spirit of the May 4 movement. The area around their was the major functioning port two years ago, but that has all been moved, and now there is a yacht club and the stadium for the 2008 Olympic sailing venues.

I took a stroll around Beijing, and went to the Forbidden Palace (where most of the main buildings are covered in green tarps for construction). Several wings of the palace formerly closed are now open, the paint is fresh in most places, and the construction and rehabilitation continues ahead of the Olympics. Everyting is based on they Olympics. It is hard to see what they will do once they are over. There will be nothing to build towards... 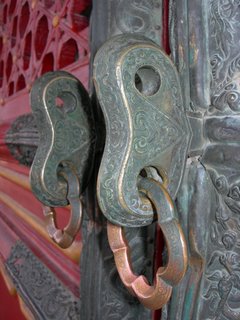 A door handle within the Forbidden Palace. 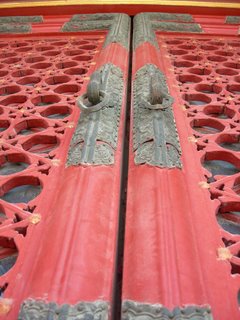 One of the many doors in the Forbidden Palace. According to one person I was talking to, the original palace had 9999 and a half rooms (no roof on the last one) because the Emperor was the Son of Heaven, and since Heaven had 10,000 rooms, the Son could not have more. Apparently now there are only some 8000 rooms left, as Tiananmen Square area is no longer part of the palace complex. 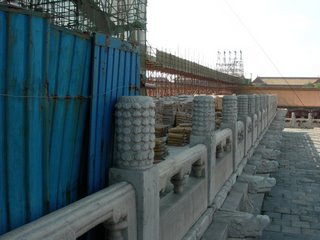 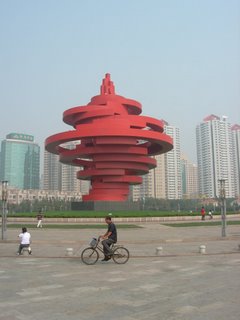 The Wind of May monument, marking the May 4 independence movement. 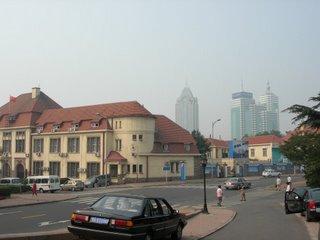 A view of the old and new Qingdao. This is the old German court house.

Its all about the beer. Like Dublin, the local brew flows freer than water. 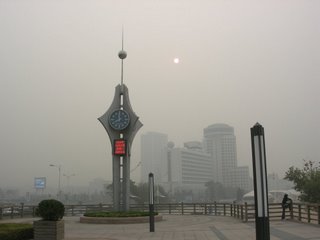 My hotel in the background, the clock tower is on the No. 1 Bathing Beach (No. 1 in chronological or geographical order, not in quality ranking).
at 8:56:00 AM