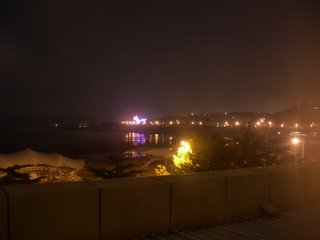 Greetings from scenic Qingdao, China (well, I hear it is scenic, it was dark when I got here). After three flights, 18+ total hours in the air, several more in airports and transit, I begin my latest whirlwind tour of East Asia. I had a very warm welcome and am staying at a very pleasant hotel on the seaside. Things will be busy in China, not only because of the National Day holiday and the New moon festival (Chusok in Korea), but Abe is coming over from Japan, then visitng Roh in Korea, then Roh comes over to China - and all are talking about North Korea's nuclear statement. Now Pyongyang has made this warning many times before, but always through back channels. The Chinese are getting rather teed off at their North Korean neighbors and trying to push the idea of U.S.-PRC cooperation as the solution, South Korea is extra anxious to win the UN Sec Gen seat, and Japan is itching for an excuse. Only Russia sits on the sidelines, lamenting that if North Korea tests a nuke, it could cause environmental damage. Environmental Damage? What about a fundamental shift in nuclear non-proliferation, in the balance of power in Northeast Asia, or perhaps in the triggering of a new war... But I digress. The food this evening was great. Several more courses than a normal person can eat, but all lovely, from the spicy/tangy seaweed-jello soup to the grilled mountain birds with their beaks open in song (but their outsides glazed in a nice brown sauce rather than feathers). The town has a large Korean population - some 80,000 full time and well over 100,000 total. Many of the hotels and bars have Korean names as well as their Chinese names, and there are some 100 flights between here and Seoul a week (or so I was told). Anyway, it has been a long trip, and I need rest. Will update more as we progress.
at 11:10:00 PM