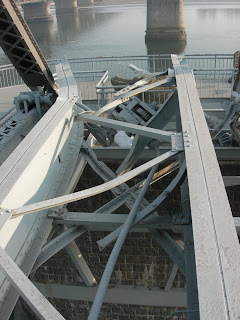 A visit to Dandong is incomplete without a walk along the "Broken Bridge" reaching half-way across the Yalu River. It is maintained as a tourist attraction (complete with admission fee), and a source of propaganda against the U.S. involvement in the Korean War and glorifying the role of the Chinese People's Volunteers. Sort of ironing, though, that the bridge itself is a piece of Japanese workmanship from the time of Japan's occupation of Korea and Northeast China. 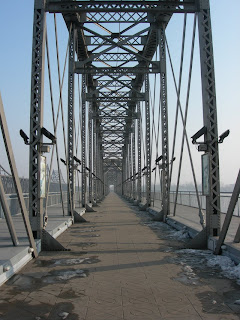 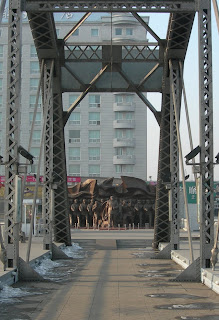 The People's Volunteers frozen in an eternal march toward North Korea. 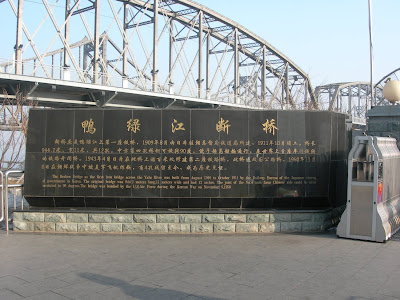 The as the first iron bridge across the was built from August 1909 to October 1911 by the Railway Bureau of the Japanese vicereg-al government in . The original bridge was 944.2 meters long, 11 meters wide and had 12 arches. The joist of the No. 4 arch form Chinese side could be circu-mrotated to 90 degrees. The bridge was bombed by the U.S. Air Force during the Korean War on .

There are a lot of bridges with lock and unlock device in the world, but most of them are with structure of pull in vertical, and this bridge is the horizontal revolving type, it is very seldom seen, therefore this bridge is most Unique.

In view of the water transportation was developed flourish on the Yalujiang river then, and in 1908 decided takes the number 9 pier as the axle and construct revolving bridge beam it can lock and unlock at any time, and pledged that the railway is unimpeded, and suit the large-scale ship navigation through the bridge this belongs the advanced technology then.

The revolving bridge beam lock and unlock drive structure is formed by two sections the first section was the driving device of revolving the bridge beam, set the 9 initiative gear wheel teeth same as agree with the passive gear wheel of center, driving the revolving bridge beam revolve 90 degrees, the second section was machinery lock and unlock device, sets up four machinery and stretches out at both ends of steel beam, and draws up the locking mechanism before starting revolving the steel beam, and the steel beam can revolve. When the revolving beam back on the original position, lets down the arm stretching out and the lock closed, and the train can pass through.

The terrace of upper site is control center of revolving beam.

The terrace of below site is special roll railcvay line machine of revolving bean.