Human Rights Watch has released its latest report on North Korean border crossers, titled Harsher Policies against Border-Crossers. The report cites interviews with 16 border crossers, as well as information from aid groups and the anti-regime South Korean paper, Daily NK. I will not attempt to address the accuracy of the report, nor the motivation of the interviewers or interviewees. The issue of North Korean human rights is one that is both troubling and difficult to gauge given the emotions and agendas of all players.

During my time in in January, I saw little sign of any North Korean border patrol presence along the river for several miles, but that was a survey of less than a week. There are places just east of city where the river is no more than a few feet (and in one spot, just 18 inches), with no fences on the North Korean side and a single barbed wire fence on the Chinese side. Crossing is likely limited more by fear of retribution than of difficulty (unlike the more heavily fortified DMZ or the old Berlin Wall).

Stories, oft repeated but never directly sourced, floated around Dandon of the treatment of North Korean border crossers who were caught and turned over to North Korean security. Typical of these stories is that those caught are pierced beneath the collar bone and strung together on a wire to be walked back across the bridge, or pinned through the flesh between te thumb and index finger and strung together on wire that way, though no one who told these stories had actually seen the actions take place.

and use such stories to discourage the movement of individuals across the border – for political and security reasons, for security and economic reasons. There is likely a certain level of truth in the allegations, but a certain amount of exaggeration as well. Historically, there has been a fair amount of human activity across the border, mostly illegal, but frequently facilitated by border security on both sides that are willing to turn the other way for a fee, like a television set or some other useful commodity.

That still seems to be occurring, but the increase in Christian aid groups on the Chinese side of the border is encouraging more North Koreans to cross, offering promises of assistance and a better life (but in some cases manipulating the flow of border crossers for broader political goals). Barely across the border, where the river is just a few feet wide, the bright neon protestant church crosses light the night sky to guide the North Korean pilgrims on their way. Then comes the longer trek to or or , before a very small fraction can ever make it to (where many soon find that, despite the better economy, they are unable to adjust and make their new country their home).

Below are a few pictures of the area, across from in , one of the more heavily crossed areas of the North Korean border, due to the easy access to the Chinese city. These are from January 2007, and show in some places the minimal physical barriers to crossing (though there are many ways to discourage such activity).

One of the church complexes along the Chinese side of the Yalu river, opposite North Korea. In Northeast China, three are many more visible protestant churches than in some other areas. Near the Yalu, many of these are ethnic Korean. 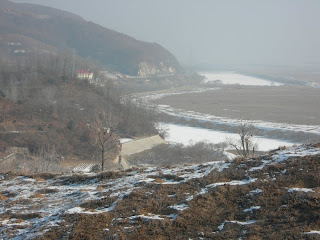 DPRK/China Yalu River border. Around the bend, the river narrows to a width of just 18 inches, considered (by my guides) the narrowest spot in the Dandon area. 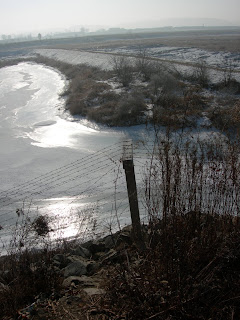 The barbed wire fence on the Chinese side of the Yalu. This fence is only in place where the river is rather narrow. On the North Korean side, the land is flat, and cultivated right up to the river's edge. On the Chinese side there is an embankment above the wire fence, leading to rural housing and farms. 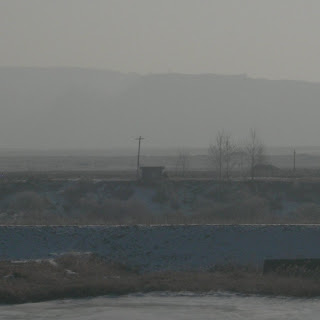 A North Korean border guard resting by his post along the Yalu river, east of Dandong.
at 1:37:00 PM