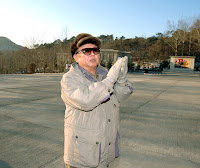 The first quarter is almost up, and Kim Jong Il’s inspection tours this quarter have been a typical mix of economic, social and military locations, though military inspections were a bit low this quarter compared to previous first quarters. Kim made four inspections of military sites in the first three months of 2007, including one connected to a tank division.

Number of military sites inspected by Kim Jong Il in the first quarter of previous years:

Kim’s main focus this quarter was in the energy and economic realms. Even as the six party talks started and stalled and started and stalled, and as and South Korean military exercises ramped up, Kim stuck to the economic activities (something he does quite a bit these last few years). There is a major push on internal economic issues, and the six party talks coupled with the development are ultimately designed to help spur the DPRK domestic economy. During the quarter, he visited:

the Youth Electrical Complex in Huichon

the of Mining and Metallurgy

the construction site of the Orangchon Dam

the Pakchon Silk Mill in

And, as usual, Kim spared time for cultural activities, including:

a visit to the statue of President Kim Il Sung in Ranam District,

a visit to the Malum Revolutionary Site in

field guidance to Chongjin University of Mining and Metallurgy

the art performance "The Blue Sky over My Country" (Part Dawn.)

Finally, Kim paid a visit to the Chinese Embassy to mark the Lunar New Year. Much was made of this visit in the press, but in fact it is not all that unusual for Kim to visit the embassy or meet with the Chinese in the first quarter. While in other countries a head of state visit to an embassy is a major deal, in , so long as it is the Chinese embassy, it is not entirely out of the ordinary. Despite the mixed feelings between DPRK and PRC, remains heavily reliant upon Chinese goods, services and good will. And the visit to the embassy was a way for to symbolically show it understood that dependency.

Other key first quarter meetings between Kim and included:

On , Kim visited the Chinese embassy.

On , Kim met with the incoming Chinese Ambassador (Wu Donghe).

On , Kim visited (technically in the second quarter)

And on , Kim visited the Chinese embassy in .

In addition to these, Kim had several meetings with various Chinese officials visiting .

So what does all this tell us? Not much. But sometimes watching Kim’s travels can reveal national economic or strategic priorities, and the focus on economic and cultural issues over military ones suggests that DPRK is not feeling any particular pressure after the nuclear test or amid the six party talks. is feeling confident.