I'm back in Beijing, briefly, and thought I'd share a tiny piece of a day here (this is just a fraction of the 230 or so pics I took). The air is full of the yellow dust, construction dust and car exhaust, there is massive security for the CPPCC and NPC sessions, and all the subway stations are under construction and half torn apart (aside form those on the new number 5 line). But the food is good, the art scams are going strong, and there is plenty to do and see.

A guard stands across from Tiananmen Square in the morning. the Square was closed in the morning for the final session of the CPPCC. Security was heavy to dissuade any protests or disruptions. This guy was prepared for any self immolation attempt or other fire emergency.

The new North-South Number 5 subway line is open. Modern, clean, and with the glass safety doors. Packed like sardines on the cars, though. The new cars are clean, have electronic maps to show where you are and where you are going, and some have security cameras mounted on the ceiling. the rush to finish the subway by June has allowed Canadian and Japanese firms to get nice contracts, along with Chinese companies. Everyone wins... 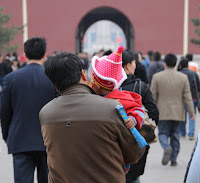 A local tourist finishes a day at the imperial Palace Museum. Couldn't resist the hat. 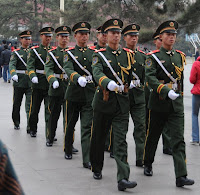 Guards marching toward the imperial Palace after closing time.

A door pull in the Imperial palace. This door hasn't been caught up in the renovations... yet.

One of the workers taking a break from placing new tiles as part of the renovations of the Imperial Palace.

An artistic iced mocha at the Coffee Lobby near the Chaoyoungmen subway stop. 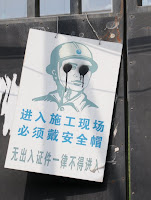 Not sure what they didn't like about the hard-hatted construction worker, but he can't see now.

Construction over near Wangfujing. All the construction inside the second or third ring roads was to have been completed before January. Not a chance. I'm not sure it will be done before the Olympics are over.

Cleaning up the stream for spring. 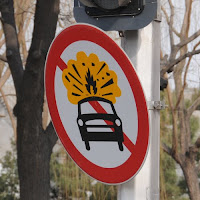 I cant decide if this is an admonition against blaring horns or car bombs, but neither are all that appreciated.
at 11:44:00 PM