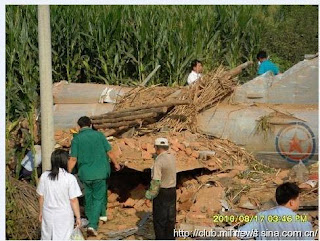 Chinese media is reporting the crash of an unidentified “foreign” aircraft in Liaoning province. Pictures purported to be from the scene appear to show a North Korean MiG 21 that has crashed into some sort of thatch-roofed farm building near a cornfield. The red color of the soil, the corn and the farmers in the picture suggest this is indeed an image shot in northern China, though it is unconfirmed at this point whether the images circulating on Chinese internet sites are really of today’s crash. Some Chinese media is suggesting at least one individual is dead in the incident,and that the North Korean embassy has dispatched a team to the area.

The location of the crash, some 100 miles from the North Korean border, raises several questions. Was this a North Korean pilot defecting? it is highly unlikely that such a plane could have slipped into Chinese airspace unseen by the Chinese military, so why didn’t they respond? The images do not suggest the plane exploded or was shot down, rather that it made a controlled crash landing.

Another possibility is that the North Koreans are now receiving air force training in China.  The Anshan air base in Liaoning province is not far from the crash site, and the Chinese fly the J7, a Chinese knock-off of the MiG 21, out of that field. The DPRK may have been receiving external training for their pilots, and China has been trying to keep this quiet, particularly given the tensions between the US, South Korea and North Korea and China following the sinking of the ChonAn earlier this year.

North Korea’s air force gets minimal time aloft, and only in recent years has the North Korean military begun increasing the number of flights for its aging Soviet-era fleet. The North Korean air force has had to deal with shortages of fuel, spare parts and seasoned pilots, and has had minimal training and experience. In 2009 another MiG 21 reportedly crashed of the east coast of North Korea, emphasizing the difficulties the North is having as it tries to revive its fleet. It would make sense, then, that the North would be training in China. The question is whether the Chinese would want such training to be made public at this time. 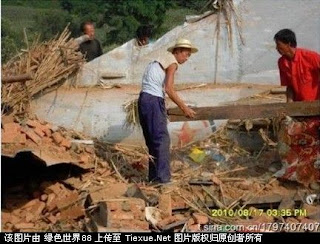 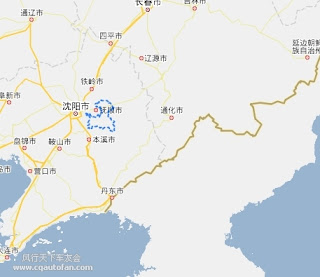