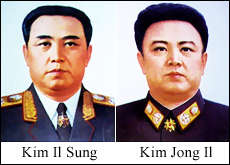 Kim the Elder and Kim the Younger

Rumors and counter-rumors are flying around about the mysterious disappearance of images of Kim Jong Il’s pictures from public places in North Korea amid unconfirmed (and even contradicted) reports that North Korean media has dropped the “Dear Leader” epitaph when referring to the son of the “Great Leader” and president in perpetuity Kim Il Sung.

The initial rumors appear to have started when some “top ranking diplomat” told ITAR TASS that the portraits of Kim had apparently been removed from public places.

A light rectangular spot and a nail in the wall were the only things that remained in the place where Kim Jong Il's portrait used to be, he said.


From there, the story spread, with reporters in Russia, South Korea and Japan all jumping on the bandwagon, contacting sources and sources of sources to confirm, deny or basically fail to contribute anything to the general question of whether – and why – Kim’s portraits may have been removed.

Then, Japanese media reported that Kim was no longer referred to as “Dear Leader” in the North Korean media, a charge that was refuted by South Korea’s Yonhap news agency. Amid all the hubbub, Kim visited KPA unit 754, apparently oblivious to all the fuss over his pictures.

The conflicting reports have triggered a wave of speculation, from (perhaps wishful?) rumors of a military coup to a semi-organized public disobedience campaign to a serious illness to preparations to replace Kim’s photo with that of his successor. The only thing not thrown out is that Kim may have decided to change his hairstyle, and perhaps wanted the portraits to match the new do…

My view is that the selective removal of the portraits may be part of a broader PR campaign; first to shift the loyalty and attention from Kim to North Korea, and second to prepare for the eventual grooming of a successor – one who isn’t his son. (of course, I have no idea why they would leave the place looking like the Grinch had come through on Christmas eve – “On their walls he left nothing but hooks and some wire.”)

Kim was already known to be modest (OK, maybe not known for it, but reportedly he was somewhat modest, not too keen on his own appearance, a little self-conscious). Removing his portrait is simply a way of making himself look more like one of the guys, something his late father managed to do quite naturally, being a former guerrilla leader and constantly visiting the common man (something Kim seems less than comfortable doing, I mean, when was the last time you saw a picture of the younger Kim sitting on a mat outside chatting with the peasants, or walking down a snow-covered path surrounded by school kids in their bright red scarves?).

Instead, Kim junior seems aloof, distant and, to put it bluntly, socially inept. Just look at his meeting with Albright when she visited. He took her to a mass gymnastics display, and showed her pictures of his model rocket (which did manage to fly over Japan). Kim could now be seeking a slightly different approach to reaching the people – forget about the “cult of personality,” at least love the country – and stop the incessant defections to the South.

But Kim may also be building toward a subtle mindset change among the North Korean people themselves. Having his and his father’s portraits together leaves the impression that dynastic succession is the norm in the Democratic People’s Republic of Korea. But none of Kim’s sons really seem all that qualified for leadership, particularly not the Disney World visiting Kim Jong Nam. So Kim may be simply paving the way for a shift I understanding, one where the next leader may well be based solely on merit, rather than relying on the added bonus of nepotism. If so, North Korean politics could get real interesting in the coming years, as younger cadre compete for the attention of the Dear Leader (if that is what they are still calling him), and older cadre try to get their sons in line for the top job.