How I Got There: Part I

Sitting aboard the Il-62, listening to the patriotic strains of martial music swell and ebb over the sound system, songs of devotion to the motherland, praising the Great Leader and Father Kim Il Sung, the Dear Leader and General Kim Jong Il, interspersed with wistful strains of nostalgic music, pining for the days long gone of the countryside and sea, the beautiful land. 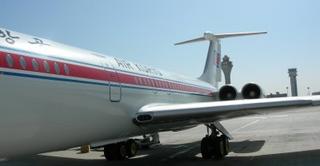 The flight attendant interrupts, the breathless, nearly orgasmic sound of her voice intoning the flight time to Pyongyang, speaking in that unmistakable cadence of North Korean announcers. When shifted to English, the intonation disappears, and we are reminded “no smoke, no use of the telephone.”

Customs declarations are handed around, asking if we have any “weapon, explosive, ammunition, killing device” or “drug, exciter, narcotics, poison.” 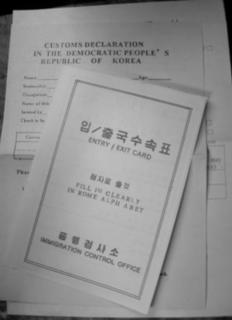 The engines outside my window whine, scream, and the plane jerks forward. The engine noise grows deafening, the air is hot and dry, and the Il-62 begins its slow role forward down the tarmac.

A dozen minutes later and still sitting there, waiting, though the air conditioning has finally kicked in, and the air becomes more bearable, though no less stale. The engines roar as our turn comes, the plane slides back and forth across the runway as we move forward, like it were skidding on ice. The take-off is anything but smooth, accelerate, decelerate, slide left, slide right, dip and climb. The engines drown out all other sound as we slip and bounce through the hazy air over Beijing. 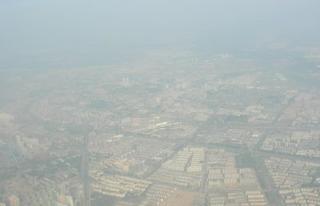 As we climb, the thick haze swallows the city, leaving just a blur visible through the milky sky. And then, as we continue to climb, the erratic flight smoothes out and the Great Wall slips below us, a tan line tracing the ridges of mountains partially obscured through the hazy smoke that is the Beijing air. As we head north, the mountains fade from green to red, the crisp autumn air below clearer than over the city.
at 7:01:00 AM

We are planning to travel to NK and could you tell your travel company.
My name is Ganzorig.Ts and I am owner of Mongolian travel company. Our web sites are www.badarchin.mn, www.travelgobimongolia.com