How I Got There: Part II

My head is growing used to the droning whine of the two Soloviev D30KU turbofans outside my window. The breathless yearning intonation of the stewardess breaks above the engine noise, but her flat English reiteration is lost in the hum. Apparently it is the food service. 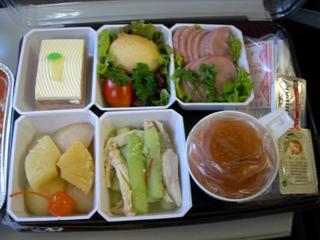 Squeezed in under-sized seats, the meal proves a challenge to eat, not due to its... interesting contents, but simply to the lack of space available. The meal is quite the spread. In addition to what appears to be a deep-fried hard-boiled egg and some mystery meat, there is a pleasant cucumber kimchi salad, a piece of cake, some beige fruit and a roll, as well as the hot meal, a potato/chicken dish in a red sauce (not spicy) with rice. Drinks include beer, beer, beer and fanta.

From the air, there is little difference between the North Korean countryside and th farmland in southwest South Korea. The farms and fields follow the contour of the land. But the closer we get to the airport, and the capital Pyongyang, the more regular the farms and the more neat and kept the houses. 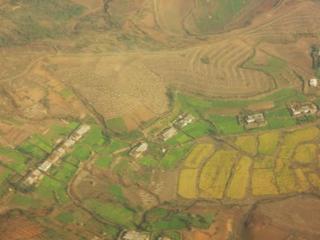 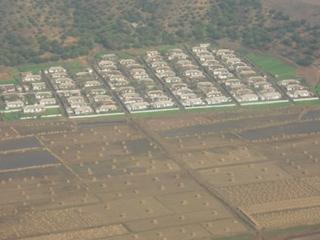 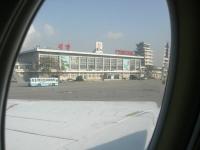 At 1400 Beijing time the wheels touch down, and after a bounce or two we are finally in Pyongyang, local time 1501. As we taxi toward the terminal, several things become apparent. First, while anti-aircraft batteries were visible from the air not far from the airport, there appears to be no ground security beyond a chain link fence and periodic small guard-houses, all seemingly unmanned. Farmers work in plots of land abutting the fence, while another rides their bicycle along a raised pathway between the fields.

And then, out the window, shines the smiling face of Kim Il Sung atop the terminal. It is at this moment that it all becomes real. We pass an Il-76, a team of workers atop its wing, and on the other side of the tarmac sits an Asiana airliner, which at first makes me look for the MiGs that forced it to land until it dawns on me that there are large South Korea tour groups in Pyongyang at the same time. 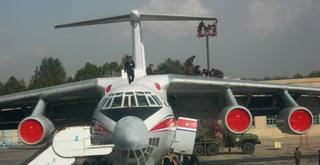 After the excitement of passing through the vintage metal detector and sending my bags through an X-ray machine built by Roentgen himself, I emerge into the other side of the terminal, only to have my passport and return airline ticket collected by the guide. The idea is that, should I try to sneak off from the tour and rejoin them at the airport later, I will be unable to do so. This is the first introduction to the sense that I am a disease-vector and the country must be kept safe from me. It will not be the last time I get this feeling.
at 7:33:00 AM