Welcome to the Bus 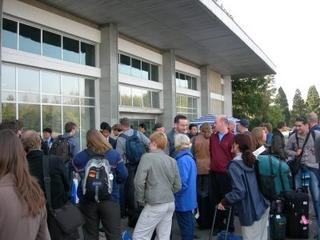 We are given three guides, a bus driver and a videographer. The guides are, almost comically stereotypically, named Mr. Park, Mr. Lee and Mr. Kim. One handles arrangements, one leads the tour, and the third sits in the back of the bus to keep an eye on everything. He is introduced, somewhat tongue in cheek, as he “head of the English department,” but as becomes quickly obvious, he is our political commissar, the man to make sure nothing untoward occurs, that not ideological barriers are crossed, and that we don’t take pictures from the bus.

This latter rule is much less about concerns for national security per se. They are not concerned that we will pass photos of strategic bridges or anti-tank barriers to the South Koreans or Americans. Rather, they want to ensure that whatever pictures we take with us out of the country are all flattering, or at least not embarrassing. There is a clear sense that they know there are problems in their own country, they openly refer to previous food shortages, but they are violently proud of their nation, not only the parts after the Korean war, or even just from the anti-Japanese struggle of 1925-45 (which Kim Il Sung apparently led at the age of 13...), but of the same 5000 years of history claimed by South Korea.

Our guides begin with our first of several indoctrination speeches. At one point he is interrupted with questions, exasperating him. He stops the questions to state clearly and bluntly that we are to listen to his speech, and no one interrupts him. He then gives a gentle laugh and carries on. He has his requirements, and we are obliged to at least remain silent while he delivers his prepared talk. My mind wanders back and forth between his words and the scenes out the window. 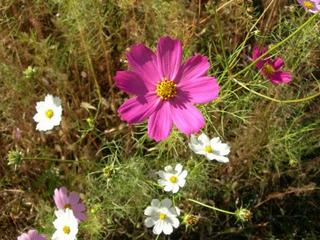 “There are 70 million Koreans; 20 million in the North, 40 million in the South and 10 million overseas...” Small children run across the street, giggling as we pass by. “...The Korean nation is a single nation with a single language, Pyongyang time is one hour ahead of Beijing time. In the North, we use Pyongyang time...” Men on bicycles ride along the side of the road. Past them, in the field, ladies in brightly colored padded jackets cut rice stalks with sickles, gathering bundles. “...The East Sea, or the Korean Sea, is wrongly called the Sea of Japan on some maps. This is not correct...” All along the roadside, wiry stalks of cosmos flowers add color to a bleak landscape. On the other side of the empty rice fields, the tile-roofed houses are beginning to crumble, their roofs discolored.

We pass on to the highway, and the guide’s speech fades into the drone of the tires. My attention is now fully absorbed by the images of the secretive land slipping by. There are several trucks on the road, many painted blue or white, some apparently hauling sacks of grain, perhaps some of the rice we saw drying outside while flying in. Green military jeeps, old Russian vehicles, pass by, occasionally stopping to pick up soldiers along the roadside. Ahead there are older ladies, backs bent, sweeping the highway with short brooms. Some men walk along in black, high-collared suits adorned with a red Kim Il Sung badge over their heart, others in dark western style suits, others in the dark blue or olive clothes so often seen in Asian Communist nations. Still others simply wear slacks and jackets, mostly in dark colors or tan.

Off in a field, an ox draws a cart piled with straw. School children, in their matching blue and white uniforms, some with vivid red scarves, pass by in small knots. As we get closer to the city, the ladies clothes take on an air of business, tight knee-length skirts, matching jackets over white blouses, far different from the clothes in the farms. We pass the globe-shaped Three Revolution Exhibition Center (the three being the ideological revolution, the technical revolution and the cultural revolution) and on past a small park, where men sit with long poles and short lines fishing. Signs in red towering letters call for a stronger revolutionary spirit, encourage respect and awe of the Dear Leader and promote unification.

And as we enter Pyongyang City, the guide once again stands up, offering us tidbits of information. “Pyongyang has a population of three million people...” We pass the Tower of Immortality, dedicated to Kim Il Sung. “The Great Leader president Kim Il Sung will always be with us...” Past the Friendship tower marking the Chinese participation in the war, and pull up to the Arch of Triumph, towering over the road.
at 11:38:00 AM