Stop One: The Arch of Triumph 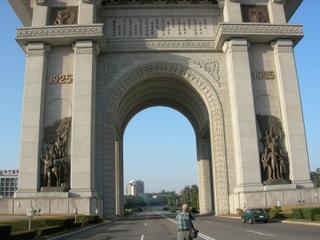 We arrive at the Arch of Triumph as several busloads of South Koreans pack up and leave – but not before some take a shot at filming us. In this situation, a busload of Americans in Pyongyang are as much one of the sites as the Arch itself.

We are met at the site by the local Korean guide, a lady dressed in a think, almost velvety hanbok, dark with flowers and a shining Kim Il Sung badge over her heart. She tells us about the monument, about the anti-Japanese struggle and the glories of Kim Il Sung. 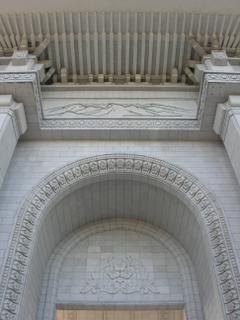 The Arch is 60 meters high, 52 meters wide, the Song of General Kim Il Sung is engraved along the top. There are 70 azalea flowers on the arch, its totals 15000 square meters. It was built in one year and eight months. These are the sorts of details we are told everywhere. The size, the details of representative images, and the relationship to the revolution or Kim Il Sung.

Like the South Koreans, the North Koreans refer to “my country” (uri nara), when talking about their home. 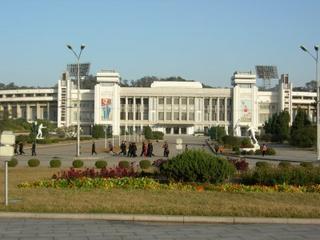 And as we wander around looking for that perfect photo, we are hurried back on the bus – but only after a stop at the first of several souvenir stands, all of which sell the same revolutionary booklets and postcards. 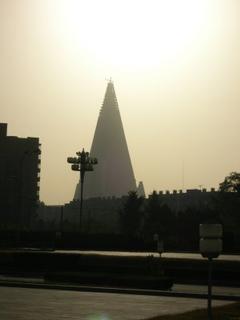 As we drive to our hotel, school kids in uniforms and red scarves wave merrily at our bus. There are few cars in this part of town, giving the entire place the feel of a massive ghost town – large tree-lined avenues nearly devoid of traffic in the afternoon, massive apartment complexes with empty parking lots, a thin layer of grey dust settled over everything. There is a surreal quality to the scene, a sense of complete isolation and loneliness despite being on a packed bus. Only the red letters of the slogans and praises for the Great and Dear leaders cut through the monochromatic world around us, until we arrive at the Koryo Hotel.

IMHO posting pictures in a bit higher resolution would be a great idea ;)