A Bright Hotel in a Dark City 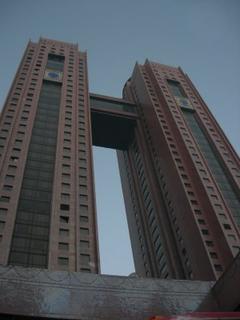 The Koryo Hotel in downtown Pyongyang is a massive 40+ story set of twin buildings, connected with an aerial walkway making the entire structure look like an “H” standing on a pedestal. The towers are a pinkish-brown, with a large gold and blue decoration several stories down from the top. The lobby is in ostentatious décor, mirrored, marbled and bedazzled.

While the hotel is lit up, the only streetlights contributing to the scene outside are he two directly in front of the hotel. The rest of the city is dark, aside from the lights coming from the windows in the apartment blocks along the road. The traffic girls, in their blue skirts, continue their robotic movements in the intersections, with lit wands guiding the few remaining cars on the road. People wait by the bus stops for the electric trams or the buses, or walk down the sidewalks in the dark. 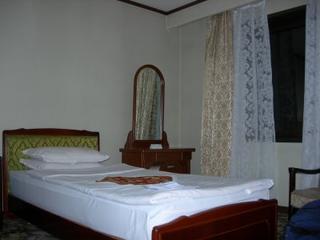 We drive off to the restaurant, a hot pot joint already decked out for us. This is our first meal in North Korea, and we are quickly introduced to the fact that there is only one drink for the round-eyed big-nosed imperialist American aggressors – North Korean Beer. Every meal in North Korea (aside from breakfast) is accompanied by two large bottles of beer at the table. If you ask, there is occasionally bottled water, fresh from the springs of Mount Kumkang.

After dinner it is off to the stadium, with our large souvenir tickets tucked in our pockets. As we near the stadium, a glow diffusing through the dusty night indicates where the Arirang Mass Games will be held – and where all the electricity that would otherwise have been available for the street lights has apparently gone.
at 11:39:00 AM

Really there wasn't anything else? Even tea?

What company you used? I am owner of a travel company. My name is Ganzorig.Ts. www.badarchin.mn, www.travelgobimongolia.com my email address is ayalaajav@gmail.com