The official reason for our trip to the workers’ paradise was to observe the Arirang Mass Games, a spectacle of music, marching, dancing and gymnastics, with a backdrop of some 50,000 school kids flipping colored cards to make murals of revolutionary feats throughout the history (and future) of North Korea. 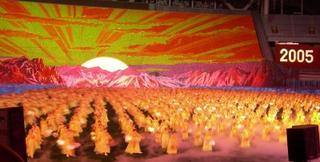 Our guides on the bus struggled with explaining the concept of “Arirang” to us, saying it was a story of a boy and a girl, separation, love, the history and soul of the nation, and, well, after we saw it they would try again. (A Yonhap explanation and recording is available, and several versions of Arirang Song can be found at the Music from Korea page, including a few particularly ... um ... rockin’... versions of Arirang, one by the Yoon Do Hyun Band or another by Shin Hae Chul/NEXT.) In essence, Arirang is a folk song, sung un both North and South, that has come to symbolize the trials of the Koreans, their love for their homeland, and their desire for the reunification of the nation and peoples.
Now, seeing North Korea’s Arirang Mass Games performance is quite a different thing. First off, the 2005 version is a rerun. Yes, even North Korea is apparently running out of ideas. Well, perhaps it is, as Broadway would term it, a “revival,” rather than a rerun. The 2002 performance was such a big hit that they brought it back for 2005 – only slightly modified to remove most of the anti-U.S. propaganda. In fact, that was one of the disappointments of the whole trip for me; the dearth of quality anti-U.S. propaganda. It was like they toned down the whole country for our visit. 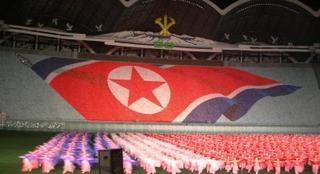 In fact, it is broader than that. Pyongyang is well versed in propaganda and rather skilled in its deployment (despite such seemingly odd phrased as “human scum”...). The shift has been noticeable not only regarding anti-U.S. propaganda, but also anti-South Korean [puppet regime] propaganda. Pyongyang is working to reshape its image and its population to better fit into a future (and currently emerging) situation in which economic and social cooperation with South Korea grows, and in which, at some point, North Korea and the United States normalize relations. This isn’t tomorrow, but it takes a while to change some 60 years of ingrained and enforced thinking. 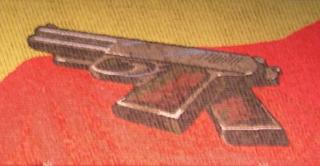 Now, as for the Mass Games themselves, they were equally impressive and bizarre, spectacular and disturbing. As I watched with rapt attention at the near perfection of movement by hundreds if not thousands of performers on the field and their living backdrop in the opposite stands, I was thinking about the discipline, skill and commitment necessary to pull it all off – and wondering if that was really the best way to utilize the human capital in Pyongyang. 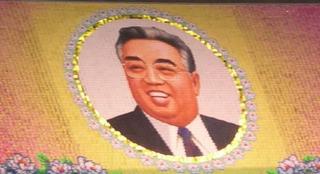 In some sense, the Mass Games give the youth something to shoot for – the chance to be the best of the best, to perform, perhaps even in front of the Dear General (a good movie to watch on this is A State of Mind, made in part by the folks at Koryo Tours). This is important, as the overwhelming sense I got from the adult population is that there is no chance now or ever for upward mobility. So while they will work their fingers to the bones for their children (as Koreans in the South also do), if it wasn’t for the overwhelming sense of embattlement in the country (the sense that America is intentionally keeping them down and could attack at any moment), there would be little drive for social order. 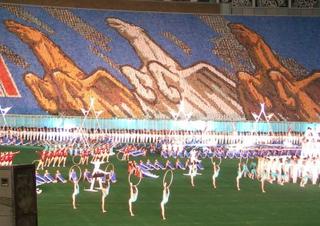 But back to the Mass Games, because I know you are all waiting with baited breath to hear about them. But can words describe the games? It is stunning. It is strange. Hundreds of young girls twirling hula-hoops on their feet... in unison. Lady soldiers in skirts playing snare drums and high-stepping to the rhythm. Huge images of catfish, ostriches and guns along the back wall. A laser show with goats and fat pigs. Thousands of soldiers with bayonets swinging them with simultaneous shouts. Trapeze artists falling several stories onto a net. A motorcycle high-wire act. Giant bungee slingshots throwing acrobats into the air. Children dressed as chickens, rabbits and eggs. A mass display of jump ropers. 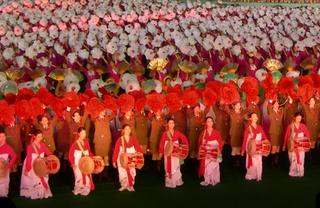 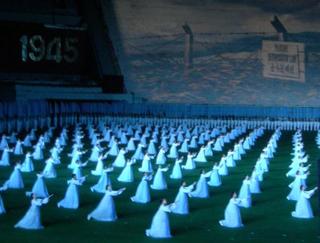 And all the while the South Korean tourists wave their unification flags and cheer or cry, the Americans gawk, and the North Koreans beam proudly as their children perform a quality rendition of a child swimming at the beach.