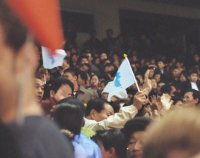 With the Mass Games under my belt, and the strains of Arirang still ringing my our ears, we file out of the stadium, past the throngs of South Koreans waving their blue and white unification flags, past the hanbok-clad female ushers, forbidding us to take pictures up into the stands, past the soldiers in green, chests adorned with medals, past the throngs of North Koreans, past the souvenir shops, selling the same books and postcards (many in languages other than English – the first batch of Arch of Triumph postcards I had were in Arabic...). 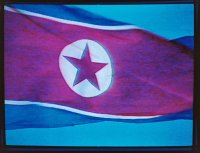 After the bright spectacle, the city seems even darker on the bus ride home; no street lights, no traffic signals, few cars, yet still people walk the sidewalks, waiting at the bus stops, the electric trolleys spark a brilliant blue, like an oversized flashbulb, and then darkness again. The two streetlights outside the hotel shine a dull amber, but look brilliant compared to their darkened cousins along the streets.

In the hotel room, the North Korean television channels are already off for the night, and there are but few lights still on in the apartments across the street. The bed is firm, the Korean comforter typically heavy, sleep comes quickly, flashes of the performance chasing across the insides of my eyelids. Tomorrow – Kaesong.