It has been a day of rapid tourism, the kind of day that, in any other place in the world, makes me stay as far from group tours as possible. But here, with little other option, I am happy to be shuttled around and sped through site after site. And while I wish there was more time for watching, for seeing, for really smelling and tasting and experiencing North Korea, I am glad to have had this bit of an opportunity.

Following the monumental tour, it was off to a pre-ordained stop at another souvenir shop. As we drive from the Monument to the Workers’ Party of Korea to our shopping destination, the contrast between old (ie post-war Soviet-assisted reconstruction) and new (ie hero-projects and monumental show-structures) Pyongyang is astounding. It boggles the mind that people don’t question the fact that they live in run down tenement style housing right next to lavish modern theaters. Or perhaps they do question these things. Perhaps there is a sense of reality, kept well concealed beneath the overt ironclad adherence and loyalty to the Juche idea, to Kim Il Sung and to his begotten successor, Kim Jong Il.

We cross the river, pass the Children’s Palace, a large, deserted department store, the Study House, the Pyongyang Grand Theater (with its traditional Korean tile roof and the mosaic of the skirted lady with a pistol), and on to the Pyongyang international Cultural Center. And it is shopping time once again. For those who live here, North Korea may be the “workers’ paradise,” but for the tourists, they try as hard as they can to make it the “shoppers’ paradise.”

But we quickly find that, while we may be whisked to several shopping locations, the fare is always the same. Ideological books and pamphlets, random selections of postcards, a few Arirang posters, commemorative coins of Kim Jong Il, Kim Il Sung and a few others, stitched pictures, miniature hanboks and Korean socks for decorations (the latter no different than all the tourist shops in South Korea)... There is no chance to get things like North Korean suits, with their high collars and dark colors, no opportunity to get propaganda posters, to get any of the socialist realism that so catches the eye.

And it’s off to dinner. Past the Pyongyang Train Station. Past an open department store, well lit inside, its rooms sparse, single product selections line walls, the stores nearly empty of customers. Several trucks pass us in the opposite direction. Some bicycles have headlights lit in the growing darkness. The flashes of the electric connections above the electric trolleys like a series of bright blue flashbulbs, or the light of a welder’s torch.

Dinner is duck, grilled at the table, served with sides, rolled in lettuce. It was, well, OK. I do not say this to be picky, either. The sliced duck heart, for example, was, well, interesting. (Getting it identified was interesting as well. We couldn’t figure out if it was liver, pate, gizzard, and so asked the passing waitress, who tapped her chest after saying “ori” (which means duck).) Having eaten plenty of Korean food in the South (and overseas), perhaps all that Cholla home cooking spoiled me, or perhaps the North Koreans were trying to adjust the tastes to fit us foreigners. Or maybe their food isn’t all that entertaining? 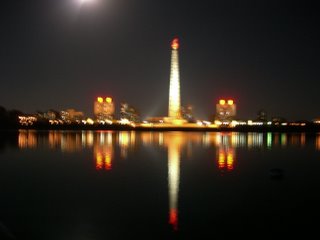 And our guides have one more bit of fun for us – a trip to the Yanggokdo Hotel. The casino is not all that exciting, the hotel shop is a little better than ours. Here all the South Koreans are staying, isolated on the island, quarantined from the North Korean population. The rumor is that they are locked in their rooms at midnight – from the outside. I get a chance to wander around outside, unaccompanied, in the parking lot, walking over to the waters’ edge, the Juche tower reflecting off the river. As I pace around in the cold air, I hear another set of footsteps echoing mine, on the other side of the parked busses. As I come around, there is someone trying hard not to look like they are watching me, turning to look inconspicuous as I stroll back over to the hotel.

And off we go, back to the Koryo Hotel, to our narrow, hard beds, our heavy Korean comforters and a welcome rest after a long second day.
at 12:03:00 PM