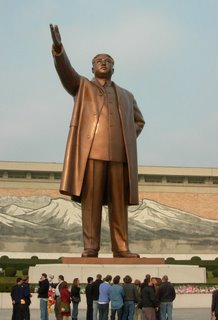 As we boarded the bus, we were introduced to a new gentleman on board – Mr. Oh, acting president of KITC, who will travel with us for the day “to make sure everything is alright.” We are given a quick rundown of the day: Mansudae Park, The Grand Monument on Mansu Hill, the War Museum, and then... well, the rest hadn’t been confirmed yet.

Once again we are flooded with a list of dates, sizes and other facts, which I believe are intended to impress just by their sheer bulk and “factualness.” There is one thing that seems rather apparent – the Corollary to Mao’s “Find truth from facts” seems to be “If I tell you facts, you must believe the whole truth.” Thus by reciting numbers – the facts – we are to believe the entire woven story of North Korean life, revolution and ideology.

The Great Monument on Mansu Hill was built in 1972 on the occasion of Kim Il Sung’s 60th birthday. It is a bronze statue, flanked by two memorials; on his right hand is Korea before revolution, on his left is post-revolution Korea. The mural on the wall behind the statue is of the revolutionary Mount Baekdu. In the museum is a history of the occupation, struggle, war and reconstruction from 1905 to the present. 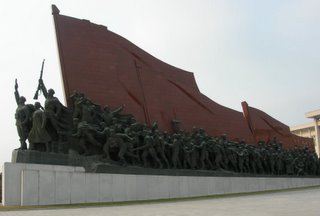 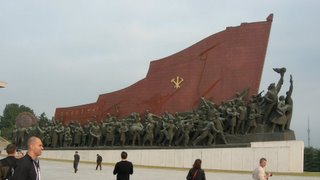 Before we can approach the Great monument on Mansu Hill (the infamous Kim Il Sung bronze statue), we stop at a park for a photo op and the privilege to buy flowers to lay before the statue. It is here that the mystery minders make their appearance again, keeping the stragglers and wanderers in the correct area of the park. And it is here that I encounter the political elite; the well dressed women and men, smiling courteously to me (as opposed to most we encounter on the streets, who look away perhaps to avoid getting into trouble). And one lady in a skirt and jacket, holding the hand of her small child, leans down and whispers in his ear, and the child turns to me and in a clear (if accented) voice belts out “Good Morning.”

This is the precocious and simultaneously shy “good morning” encountered so frequently from little school kids in South Korea, and when delivered by middle school girls is followed by a bout of giggling and hidden blushing faces. 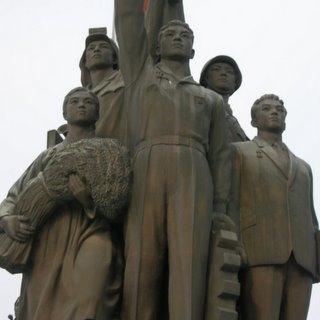 Before anymore interaction takes place (aside from a brief exchange with the roving flower seller) we are herded back onto the bus for the very short drive to THE statue. As we unload, we are given a brief lesson in etiquette, instructed in the appropriate way to lay our bouquets and line up for a bow of respect, and the admonition to photograph the complete statue, not just parts (our tour organizer in Beijing reminded us before we left that little optical tricks such as looking like you are holding Kim Il Sung in your hand are frowned upon...).

Now, not to be rude, but the statue, while gleaming and quite striking for the style, pose and clothing choice, was not nearly as tall as I expected from all the pictures. Apparently the North Koreans aren’t opposed to a little optical trickery in their photos... 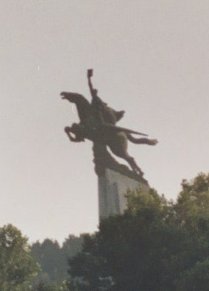 As we are ushered off with little time for additional photos of the monument, the flanking bas reliefs or even the Cholima Horse statue off to the side of the square, a group of North Koreans, resplendent in their hanboks and somber in their dark suits, lines up before the statue. Their loudspeaker begins playing somber, revolutionary music in adoring tones, they listen to a speech in the breathless exhortations of someone speaking about Kim Il Sung, or simply making a public address in North Korea.

Back on the bus, we drive past the Supreme People’s Assembly building, and on our way to the military museum. On the sidewalks, women carry their children on their backs, wrapped tight in a blanket – a site common in the south as well. Again the similarities between the South and North keep cropping up in spite of the ideological differences.

Traffic is heavier than I expected as we approach the museum. Across the street are several open trucks loaded with soldiers and sailors – and we are rushed inside the museum so as not to take pictures. Here the true level of Pyongyang’s power problems become apparent as we are shuffled through dark corridors in the cold stone building, our footsteps echoing into the emptiness around us. The lights are turned on as we enter an exhibit room, and switched off just as fast when we leave.
at 3:17:00 PM