Day Three: On the Propaganda-Go-Round 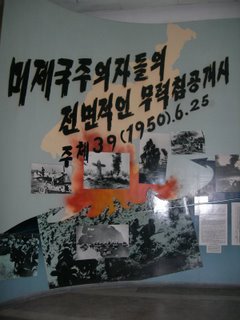 I like military museums. They have lots of cool technological stuff, weapons of destruction (mass or otherwise) and their structure, layout and displays tell a lot about the people that put them together. The Chinese military museum, in Beijing, is magnificent for its old-school Cold War charm. It towers, adorned with a red star, complete with ballistic missiles in the parking lot. The North Korean military museum, at first impression, pales by comparison.

We were rushed in (to prevent us from photographing the soldiers and sailors across the street waiting for their tour) and sent scrambling down the barely lit echoing corridors seeking out our guide, who, as we arrived in the first display room, was already part way through her presentation. It was a presentation that was apparently simply drilled into her head in English, memorized and ready for recitation, no matter what the circumstances.

As she went on about the true start of the Korean War, one of our regular guides reminded her that our group had not heard everything she had told the group that had preceded us by five minutes. So she stopped mid sentence and restarted from the beginning. You could almost hear her brain rewind. Part way into her retelling, our regular guide got impatient, and stopped her mid sentence again to send us on to the second room, where she began her new “recording” for us.

As we left the room, the lights were switched off behind us and as we entered the next room, they were switched on. We get the usual – the museum was built in just one year by soldiers in the 1970s. Kim Jong Il and Kim Il Sung paid some 15 visits to the museum... We hear of the U.S. aggression against the South Koreans first, as she drones on, reciting the memorized propaganda. The guide stands maybe five feet tall, with a green uniform skirt, her hair pulled back, a red star centered on her oversized brimless hat. Red shoulder boards and collar tabs, trimmed with gold, adorn her slightly fitted green jacket, her Kim Il Sung badge over her heart, a gold and red diamond badge above her right pocket. Sensible shoes on her feet, a drab tie at her neck, and a pointer in her hand as she leads us from room to room, reciting her prepared speech.

The rooms are high-ceilinged, wide and open, with concrete floors – echoing cold chambers with documents and paintings on the walls, a few scattered glass cases holding relics and artifacts of the great struggle with the American imperialist aggressors – a rifle, a document, even a microphone once used by Kim Il Sung. She asks if we want to see the progress of the war on a lighted map, and before there is an answer, she begins, as light bulbs mark the advance and reverse advance of the victorious North Korean forces. During the first phase of the war the North Koreans liberated some 90 percent of Korea, we are told; later the Chinese enter the war only because the U.S. bombed Chinese territory. Not even the Chinese still follow that line.

They say history is written by winners, but no one told the North Koreans that... 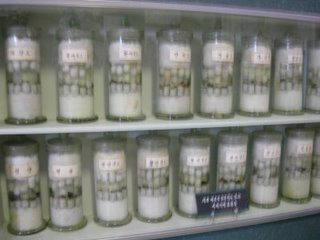 We enter a new room, shelves lined with jars of cotton balls and insects, pictures of corpses on the wall, a display of a bombed out building with various sizes of U.S. bombs displayed. Her voice quavers as she discusses germ warfare and the killing of women and children. It is the only emotion she shows on the tour (though later she blushes when having her picture taken). A lady on the tour starts droning “I can’t believe Americans did this...,” she is taken in by the pictures and commentary. While I respect those who show emotion, I wonder why anyone would go on such a trip without doing at least a little research. War is bad. People die. On both sides, there were terrible atrocities. A leftist on the tour comforts her, denigrating America.

I seethe, but hold my tongue. I am here as a guest and observer, not to promote one political view or another. I am no fan of war, and know of terrible things by all involved. But I wish people would look and see past the display, would read and ask and study, would observe and not pass superficial judgments. Pictures do lie, or at least show selective truth, and are designed to mislead. But it is not the North Koreans that I criticize – I understand the view they are trying to promote and why they are trying to do it – I criticize those who have come and not bothered to learn before traveling. This isn’t Vegas or even Paris, it is North Korea. It is a different world. But I digress. 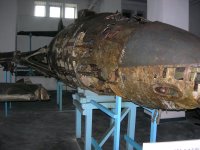 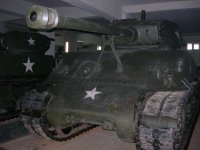 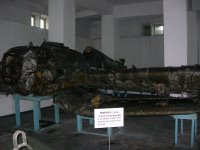 We move downstairs and my eyes light up. Here is the graveyard of American war machinery, shot down, captured, left behind. There are also pieces of North Korean war machinery, including a Yak-18 and a MiG-15. Yet here we are rushed even faster. But while we try to take pictures, they rush us off, up several flights of stairs, round and round, and into... a revolving diorama? We sit on padded benches, slowly turning to see the display along the wall. Here, more than anywhere, we are bombarded with the “U.S. Imperialist Aggressors” phrase, and while this is certainly not the trip for the uninformed or gullible, it is interesting to hear the “other side” right from their own mouths. 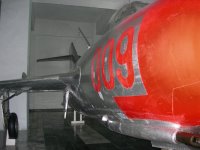 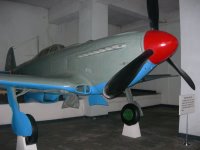 As we spin, the diorama slowly moves by amid the creaking and groaning of our turntable seats. A Korean soldier steps on a U.S. flag, North Korean soldiers are flashing bright smiles on their pudgy Kim Il Sung faces, while shifty looking U.S. soldiers lurk in the bushes, their dark eyes glaring, and we spin and spin on the propaganda-go-round.
at 2:14:00 PM