Lunch in Kaesong, the Road to Pyongyang

Back on the bus, heading from the DMZ to Kaesong. Farmers having a break, drinking together between the road and the field. A magpie lands by the drying rice stalks. Past the rail line that links the North to the South, a new station being constructed, waiting for those future trains. And we enter Kaesong, population 300,000, greeted by dusty apartment blocks, grey white. 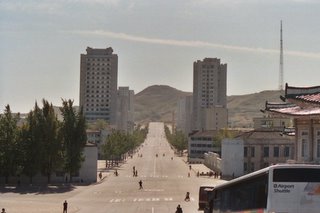 Lunch is in a restaurant where the hanbok-clad waitresses are waiting. This is the traditional Korean meal, a dozen side dishes sitting out (separate for each person, a bit of a deviation from tradition) and a small cup of a rather potent ginseng wine. The conversation flows through innumerable topics as the blushing waitresses stand by, watching their American charges.

Outside again, a brief photo op, the relative freedom of a few moments to stand, walk, watch. At the top of the hill, a statue of Kim Il Sung. At the bottom, a department store, devoid of people. Quickly, quickly, back on the bus. We have a schedule to keep. Our guides are efficient, to say the least. (after the trip, we find that our bus hit more places than some of the other buses, with their slower tourists). 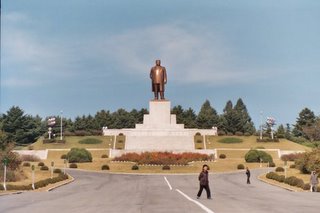 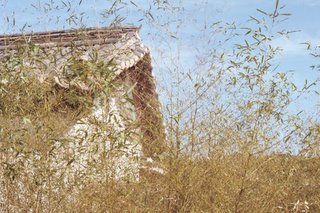 We are off to the Koryo museum, the only taste of “traditional” Korea we see on the entire trip. It is a tour that any second grader would envy – run up to an item, listen to the brief description, move on. No lingering, don’t try to stop and admire, to ingest the ancient celadon pottery, to bask in the pale green, the white inlays. The only pause is at the gift shop. Get your famous Kaesong ginseng. And so we do. And it is back out of what was once an ancient university, past the massive centuries-old ginko trees, and onto the bus.

Laundry hanging out of the apartment windows. Peppers drying on roof-tops. Children out playing by the roadside. Past a set of bone-dry swimming pools. Groups of people down by the shallow stream, washing their hair and clothes. Past the schoolyard, the children playing on faded metal equipment, once brightly colored, now mimicking the rest of the bleakness. The sense of neglect is pervasive, from the empty pools to the pale grey apartment blocks. A layer of dust coats everything, concrete walls chip and flake, color is almost non-existent were it not for the blue trim around the barred windows or the occasional potter geranium, brightening up the balcony. 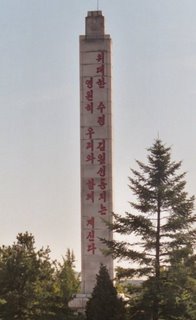 Spreading out from the city, the mountains rise, some barren, others terraced. The apartment complexes we pass are poorly built block structures, some being rebuilt, the gaping holes filled with roughly shaped block and covered with mortar – no sign of mortar between the blocks. We pass more children playing, others in groups. While there are smiles, there is no sense of the Sunday “holiday.”

(Pyongyang 156km) Children ride by on their bicycles, wearing red jackets with yellow piping on the sleeves. An open military truck rumbles up a dirt road, soldiers standing in the back. Blue buses unload school children on a road paralleling the highway. Even the tank barriers are giving in to the entropy, curved rebar twisting out of the unfinished top, a broken concrete sheath surrounding a hollow core.

A soldier, gun on his hip, holds the gate ajar as we wind through the checkpoint and near the first in a long succession of tunnels on the road to Pyongyang. A jeep by the side of the road, doors open, no passengers in sight. Schoolchildren walk by the side of the highway, shout and wave to our buses, breaking into genuine smiles that seem to only ever be seen on children. They are smiles that are not constrained by racial or ideological differences, but surmount such trivialities. The emit a sense no of depression or oppression, but of kids, looking for fun, seeking new experiences, open and friendly, trusting and no yet jaded.

At this moment, another reality strikes me. The windows of the bus are tinted blue, giving a false sense of green to the yellowness of the landscape. We pass more soldiers, seeming barely more than kids themselves, riding their bikes, their rifles bouncing against their backs as they pedal down the side of the highway.

(Pyongyang 132km) The sun, the food, the walking, the steady road noise as the wheels speed along the pavement, the breeze through the barely opened window, all combine to press on my eyelids, weighing them down, urging a rest. But I can’t stop watching the landscape as it speeds past the window. When will I again visit this land? On a hill to the east of the bus stand three mounds with marble markers, the first set of traditional burial plots I have yet seen in North Korea.

(Pyongyang 97km) A farmer walks slowly along a hillside by the road, tending a flock of white goats. An ox, plowing a field as the remnants of the rice stubble is collected and burned. Tractors are sparse, and were mostly closer to Kaesong; old red Russian or Chinese machinery, oversize rear wheels powering over the harvested fields. And we arrive once again at the rest area.
at 1:59:00 PM

Enjoyed your posts about the trip. Just want to say thanks.