The Road to Pyongyang, Part II 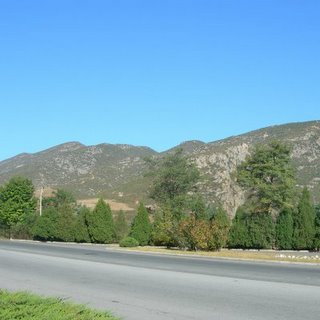 Time again to listen to the guide discuss politics. In his speech, there is a clear sense of embattlement, of being kept down by the United States, and wishing to get the united States to simply treat North Korea as it does any other nation – especially to end sanctions. One can almost sympathize with the impassioned plea, and even if not sympathizing, one can see how the state can keep the masses focusing not on their internal troubles, but on the ostensible source of all troubles – the unfairness and arbitrary nature of the United States.

He wonders aloud why Americans re-elected President George W. Bush. After all, even if they didn’t know any better the first time, they must have learned something and known he wasn’t a good choice the second time around. (Pyongyang 70km)

We pass Sariwon, which stands as a half-completed city, rusting construction cranes perched like vultures above the unfinished apartment blocks.

(Pyongyang 52km) Housing is assigned by the state. Perhaps this, in part, explains the pervasive sense of neglect? Is it hat something free is deemed less valuable than something worked for? Or is it the lack of freedom of mobility, the sense that there is no chance to move over, much less up, in the world? Is this the sociological underpinning that creates slums, no matter where in the world? The impression that movement is impossible in any direction? Why not try and create an atmosphere of neatness and cleanliness, of order and aesthetics? Why allow things to gather dust? Why not reverse the “broken window” phenomenon? A people under the Juche ideology, of self reliance and self sufficiency, and yet not taking responsibility for self?

Masses of people walk along the roadside and rail line, coming home from a day of farming. A few hopper cars, loaded with stone, rest idle on the tracks. People in yellow vests cut weeds by the side of the road. Sprawling signs exhorting labor and loyalty spread across the countryside, their red letters standing out against the earthen backdrop. Are these signs “Communist,” or are they “Korean?” Are they different than the moral aphorisms written in stark black calligraphy and hung in South Korean homes and offices?

(Pyongyang 36km) People walk along the side of the highway, crossing in front of the speeding bus, running when the horn blares. A small deer walks across the highway and bounds away into the bushes on the other side.

Ahead, Pyongyang rises as white pillars through the dull haze, a softly-focused image of the Emerald City in the land of Oz. (Pyongyang 12km) So many people still working in the fields. I guess the harvest does not respect days off.

A large solitary smokestack rises to the left, a thin wisp of grey trailing lazily out the top. Further on the skeletal framework of I-beam construction stands, awaiting the workers to add flesh to the building. Ahead, straddling the road, towers the Monument to the Three Charters of Unification. 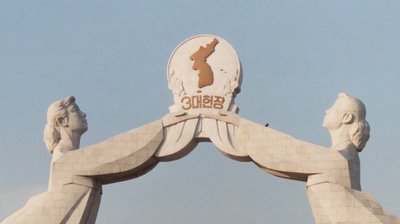