The Road to Kaesong: Part II

As we leave the rest area, we are told we have on hour to go to get to our first destination of the day – the armistice buildings. And so, more time to gaze out the window.

Young soldiers in uniform huddled around a bicycle they are fixing. Female soldiers stand by the side of the road waiting for a ride from one of the relatively frequent green jeep-like military vehicles. (Kaesong – 68km) 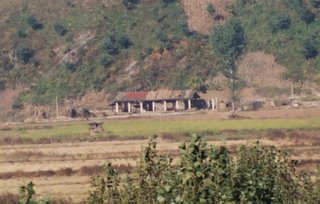 I wonder how much the gasoline for this trip costs? Four busses loaded with Americans hurtling down the highway from Pyongyang to Kaesong and the DMZ. Houses whiz by the windows, their walls starting to flake, the tile roofs overgrown with plants, perhaps gourds of pumpkins? We pass through several tunnels, and approach the first of several roadblocks. (Kaesong – 44km)

On the east side of the road we pass some sort of dinosaur museum, a small roadside building looking like any tourist trap along the U.S. highways in the west. (Kaesong – 32km)

A few men sit in a small boat, one stands to throw a net into the water. The mountains pile atop of one another, fading into the distance. There is more vegetation than I expected, having heard that the hills were stripped bare both as scars from the War and by farmers desperate for food and firewood. Not all the stories apply to all the areas. One thing that I recall is that most of the defectors who discussed famine, for example, were from the northern-most provinces. These are the provinces for the politically “unreliable,” and they are geographically the least hospitable for living and farming. Applying their views of the countryside, even if one could take them as completely unbiased in their assessments, and applying it to the entire country would be about as useful as looking at the situation in the mountains of West Virginia and applying it to the entire United States.

As we pass by people by the side of the road, they turn to look at the buses. Vehicles are rather infrequent here. Or is that simply because it is Sunday? The highway looks like a paved-over series of concrete slabs, no shoulders along the edge. The faces of the tunnels are flaking, the concrete cracked. A pheasant flies by in front of the bus, startled from the grasses as we drive by.

The view grows more urban, more houses, some with crumbling walls and unfinished roofs. And this along the main national thoroughfare. Small tile-roofed houses fill the gaps between taller apartment complexes. The grey color pervades all, broken by the bright reds from the flowers growing in pots on the balconies. All while farmers, their bicycles parked by the sides of the fields, roll the rice straw into bundles and piles.
at 2:20:00 AM