The Road to Kaesong

Sunday morning, breakfast in the hotel – buffet style. Your choice of toast, eggs, kimchi, oily kim, cake, soup and one cup of coffee (but only if you ask the wait staff). Mulling around the hotel bookshop, no one is there, it is too early in the morning, but as several people walk in and around the book area, a lady comes running up to open her store – obviously called from home to cater to the foreigners and gather their euros, yuan and dollars. But is it service with a smile.

And it’s off to Kaesong. While the guides emphasize that it is a day off, being Sunday, there are large groups of people waiting for the bus – perhaps to visit relatives or go to the park? Several military trucks stacked high with bags of grain pass by in the other direction, as the guide reminds us that in North Korea, it is correct to say “annyong hashimnikka?” rather than the South’s “annyong Haseyo?” As we cross the Taedong River, the Pueblo sits along the banks, a shining trophy to the people of North Korea – and a place we will alter have the opportunity to visit.

Out the window, the city slips away and we head into the farmlands. Large groups of schoolchildren walk together by the side of the road on a weekend outing. Rice straw is piled in the fields to dry. The guide drones on about reunification policies, and while I am interested, it seems the same old stories from the KCNA and Rodong Shinmun. Ladies work in the fields, gathering straw into bundles, and piling the bundles into mounds. Some grandfathers pick slowly through the stubble, seeking whatever has been dropped. 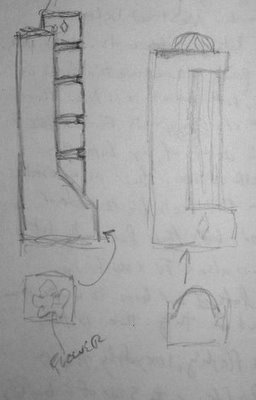 Along the roadside, tank barriers rise like monuments – some even inscribed with patriotic phrases. Far from the dull overpass-style tank barriers in the south, which are wired to fall straight down and block the road, the North’s barriers are pillars, some with flower designs, standing as columns along the apian way, their bases wired with explosives to collapse onto the road and slow any South Korean or U.S. tank formation taking the wide – but mostly deserted – highway to Pyongyang.

The guide seems to slip in his propaganda logic. My ears perk up. It seems there is another logical gap – like Kim Il Sung leading the anti-Japanese militants at the age of 13. In this case, the North Koreans claim the IAEA was trying to wrongly inspect North Korean military installations due to false information that the North was developing nuclear weapons. There was no nuclear weapon program. The next phrase, however, is that Pyongyang developed nuclear weapons to protect against a U.S. invasion. He is adamant to drive home the point that the U.S. unfairly accused North Korea of developing nuclear weapons, and that it didn’t develop them, and the accusations were simply an excuse to vilify North Korea and try to gain access to military facilities. 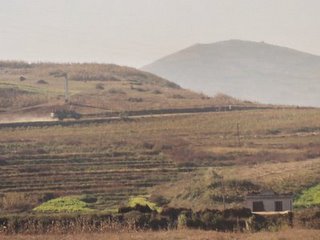 But enough about that. The guide wants us to remember that the situation now is much different than it was 50 years ago. This tour is about building up understanding and trust. Come, see, listen to what North Koreans have to say. Use your own judgment. Build up trust. The most important thing is understanding, and then building trust based on understanding. This is obviously the message he was asked to drive home. Shortly hereafter, he allows us to take pictures outside the bus windows at the passing countryside.

But apparently there isn’t understanding even between the guides, because as soon as the cameras come out, our political minder in the back of the bus rushes forward and shouts at us to stop, to put away our cameras, and to take no pictures from the bus. 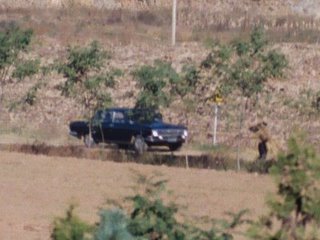 So it is simply visual observations, and my pencil flies over the pages of my rapidly filling journal. We pass by Sariwon, a provincial city in North Hamgyong Province. It is overgrown with rusting construction cranes, like trees petrified in time, not moving, and apparently incapable of moving even if there was a plan to get them going. There are half-build buildings, apartments and housing from the looks of it.

An ox cart, drawn by an emaciated ox, his ribs creasing his leathery hide, carrying sacks of grain. Several men carry piles of corn stalks on A-frame packs. Groups of people harvesting rice in the fields, others cutting the old stalks. Manual labor, a clear drop in standard of living from Pyongyang, but there is something very similar to being in the southwest of South Korea, where there is still farming done by hand, and families working small plots of land. The biggest difference is the oxen, yoked to a plow, rather than the two-wheeled roto-tiller tractors seen in the Southern fields. 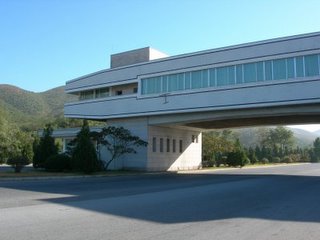 Mounds of cut rice stalks mimic the mountains surrounding the village. The mountains rise steeply, rock-strewn faces, vegetation failing to find a foothold in some places. Wherever possible, hills and mountainsides are terraced in wavy patterns of light and dark bands. Small thatched huts, raised on stilts, sit by the edge of fields, places for a break and perhaps a drink. And up ahead, spanning the highway, is the rest stop.
at 1:15:00 PM