The Children’s Palace: Cradle of Community or Conformity?

North Korea is a strange country to visit. The closed society is not as closed as perhaps anticipated, but there is always the sense that one is perhaps contagious – or a forbidden joy that all but the biggest risk takers avoid. All others avert their eyes.

North Korea is a country juxtaposing aging apartment blocks and a pervasive grey dust with massive shining stone monuments, glistening in the sun as it filters through the haze.

North Korea is a land of tight control and yet freedom – freedom for the youngest of children to roam the city with little apparent fear of harm or ill intent.

It is a land of spectacle – as seen in the Arirang festival – and a land of drab monotony. 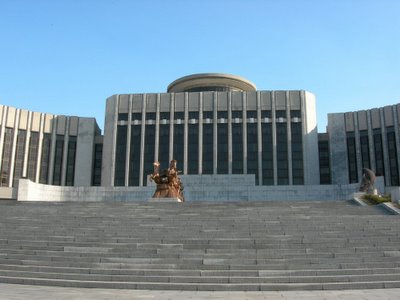 But perhaps the most impressive (or impression-making) aspect of the visit was the stop at the Children’s Palace. It is a massive complex, a curving building looming at the top of a mountain of stone steps, outstretched stone wings waiting to embrace all who make the journey to the top. A bronze statue near the entrance appears to capture the mood. 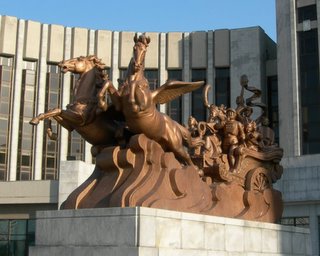 Winged horses – the Chollima spirit visible in their flared nostrils and rearing posture – pull a sled filled with costumed kids – an ancient king, a musician, a spaceman, a soldier – all rendered in that comic glorification of children seen in the propaganda posters. There is something disquieting about the socialist realism of the winged horses coupled with the whimsical realism of the children. But this, I discover, is repeated throughout the building – only in living form.

We are met by our guide, a girl of 12, dressed in her uniform, hair pulled loosely back, a watch on her wrist, a red bandana around her neck, her cheeks blushed with the honor of her role as our guide clashing with her schoolgirl shyness. Her speech is already tinged with the breathless adoration of the stewardesses and newscasters.

We enter the building, large, marble and surprisingly cold. Our footsteps echo in the massive entryway, the sound bouncing off of the cold stone all around. The shining letters of a saying of Kim Il Sung adorn the entryway wall. But while this is a place of and for children, they are dwarfed by the massive scale of the building, and the feel is colder than Mao’s mausoleum – and somewhat less cheery.

We are led on a tour of the facilities, to room after high-ceilinged room of children practicing one craft, skill or activity, seeking perfection in self and unity of group. This is the seed that sprouts into the unity of the mass games. It is the cornerstone of the unified society. But it doesn’t seem to encourage individuality, or creativity. It is about oneness – oneness with peers, oneness with the state. 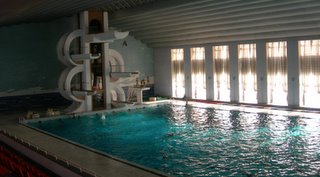 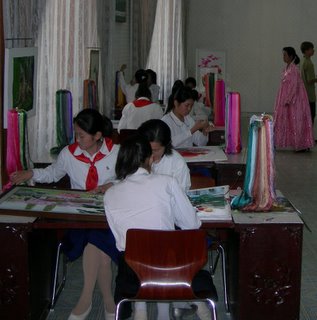 Despite the scale and richness of the marble interior, there are signs of wear – the skylights, the stair railings – and signs that things were being made pretty for the visit – the gym walls are fresh-painted (we find out when we lean on it). We are not the only guests today; a large group of South Koreans are also visiting the building, and it is for them that the improvements appear to have been made. 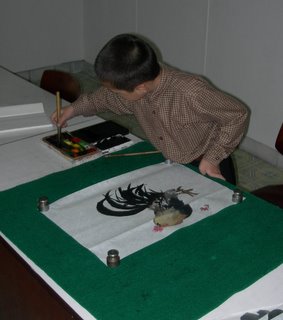 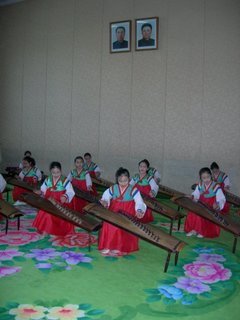 We enter the various rooms, and the instructors quickly shift their wards into giving a mini-performance. A dance studio. A massive indoor pool with a multi-level diving platform (an elevator takes the children up to their level). Accordion players. Painters. A room full of girls doing embroidery (and now I think I know where all the embroidered pieces come from in the tourist chops). Girls playing traditional Kayagum. Boys in the gym practicing Taekwon-do and playing basketball. In each room, there are the portraits of Kim Il Sung and Kim Jong il looking down from the walls. 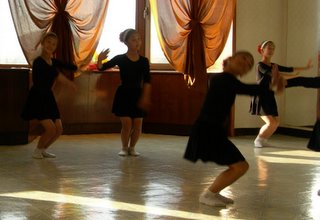 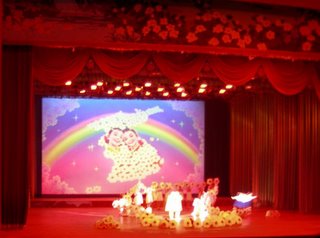 We are taken to one of the auditoriums for a performance, and some of us are chosen to buy flowers to give to the performers later. We are not the guests of honor, nor are the few parents in the audience. Rather, this is for the large group of South Korean visitors.

The show starts at precisely 10 minutes till five – perfectly on schedule and with no warning or fanfare. A six year old speaks, mimicking the breathlessness of her older mentors. The chipmunk-like sound of the hanbok-clad little girl singing. Microphones rise and descend through the specially designed stage as the performers are moved on and off in a rotating segment of the wood flooring.

There is a precision in the performance of these children – the obvious result of hours of practice for perfection. The microphones rise from small doors in the stage floor, extending to neck height. The next group of musicians rotates in on the moving floor, arriving in place just as the microphones reach their pre-planned positions. The sound of traditional Korean stringed instruments backs the young girl in her hanbok who walks out to play her wooden flute.

Musicians and stage configurations change with robotic preciseness. Girls in hanboks, boys in blue pants, white shirts and shoes, their red scarves bold around their necks. A boy walks out, a silver spangled shirt reflecting the spotlight. He opens up with the helium-induced voice of traditional Korean music as performed by a seven-year-old, swaying as he sings like a 1970s lounge act. He turns slightly, and graciously motions to his accompaniment before belting into another solo.

He gives a sharp overhead salute before leaving the stage, his band moves off, replaced by girls dancing a flower dance. Dressed in an over-the-knee version of the hanbok, unbreaking toothy grins on their powder-white faces, framed with thick red lips. Out prance the dancers, the music picks up pace, and in come the jump-ropers. One in the back misses a step, the first sign of fallibility of the performers. Faster and faster they skip rope, always in near perfect unison. Out come two more with a long rope, which, as they spin it, the smaller performers skip their rope while also skipping the larger rope.

Down comes the curtain, up come the microphones, and five older children – perhaps highchoolers – step on, accordions hanging over their chests. The girls wear blue velvet shirts and pouffy-sleeved white blouses, the in blue pants and white shirts. Their performance is followed by a song-and-dance comic lesson in the form of a dance mimicking a ssirim match. The smallest performer resplendent in red defeats the much larger blue-clad opponent. Blue wants a rematch, cheats some, but is ultimately defeated again by his diminutive opponent. Is this a thinly veiled anti-imperialist message?

More and more performers take their turn on the stage. In the South Korean section of the audience, there are some who have fallen asleep, but others watch with rapt attention. And then it is time for a unification dance, and the South Korean tour bursts into applause. As it dies down, there is a unification song accompanied by accordion, and tears in the eyes of some spectators.

And now for something completely different – a samulnori accompanied by a rock band, with a complete trap set. On the hourglass drum is the boy who is obviously the Jang of his class, playing a drum solo that would make Tito Puente cry. And he even performs the farmers hat spinning dance while playing, leaping around his drum while keeping the rhythm going. Then the band kicks in, and a girl sings a 1970s song, triggering the Pavlovian response from the South Koreans who join in with rhythmic clapping.

And then it is time for the hula-hoop performers. Kids of all sizes. Preschoolers with multiple hoops spinning. Tossing hoops through the air for the smallest of performers to catch as he spins.

And time for the finale, the stage is packed. And then it is our turn. Those of us chosen to buy flowers are sent to the stage to hand them to the our favorites, as the South Koreans pack the stage handing out pencil and paint sets, flowers and other assorted rewards. And with that we are shuffled away back to the busses. Leaving behind not just the formal show but the overall experience of seeing room after room of kids shown simply to impress us with their skills and talents.

And while these are truly impressive children, I am left wondering if there is something missing. Where is the warmth, the fun, the grit and spontaneity of childhood? Where are the runny noses and the grass stained pants? The bruises and the chasing and the noise? The cold, hard surroundings, so massive, seem to press down on the individual. There is tremendous opportunity for them here, to learn skills, to have a safe and constructive environment for after school, but is it at a cost? Is there room for individuality? For creativity? For personal expression? Can there be innovation in the future, or is this another generation destined to follow?

The facility is a great gift, it is a community of kids, but its structure and sterility leads to conformity – a great benefit to societal harmony but a hindrance to future innovation or creative response.
at 2:11:00 PM