The Way Home or Out of the Petri Dish 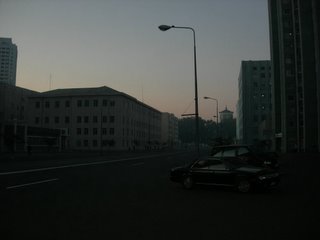 The telephone rings, I reach over, pick it up, and hear “Hello. Good Morning. Morning Call.” I grunt an assent and hang up the receiver. Actually, I was already up half an hour before the call. My sleep was not as sound, having too much canned coffee as we stayed up and shot pool until late.

This is the last morning in Pyongyang. I finish up a few last-minute postcards, pack the last of my luggage, toss the complimentary hotel slippers into my suitcase and zip it up. Outside the window, the city is starting to stir. The smell of smoke fills the cold morning air as the first people begin shuffling down the sidewalks. No one here walks in the street, only on the sidewalks, and only cross in the under-street crosswalks. 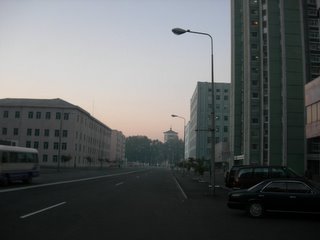 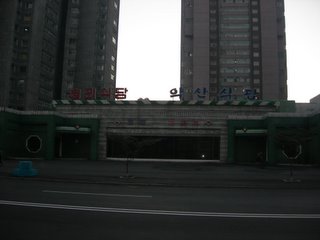 Lights are coming on in the apartment blocks as the first traffic starts moving down the streets. In the distance, one of the building’s façade lights up in blue and white flashes as the electric tram rolls by. A bicycle rolls by, a horn blows in the distance. More people begin moving slowly down the still-dark sidewalks.

I am packed and ready to go, yet not really ready to leave. At the same time, I want out of this bubble existence. I have no control over my life here. Wherever I go, people either avert their eyes or stare hard at me. There is no opportunity for simply taking a walk. We live here in a constantly moving protective security zone, tethered not for our own safety, but so that we don’t infect the population with our ideas.

That, it seems, is the most accurate way of describing the lingering feeling during the visit – we are quarantined, isolated... a tour of “bubble-boys.” And this is one of the key fears of the government – having no exposure to the “disease” of outside ideas (and thus no immunity), a violent and painful epidemic could break out should the population become infected. We are the walking bird-flu vector of alternative thinking and differing realities.

The question for the government is whether they decide to slowly inoculate the population or try to keep it sterile. But it cannot remain sterile forever, can it? Already ideas, images, thoughts are slipping in over the border. Our own tour may be part of this inoculation campaign – exposing the people to a relatively neutralized strain of Americans. Or were we simply held in a sterile containment, given a sanitized tour where, though we can see them, they cannot be dangerously exposed to us?

And so, as we drive to the airport, we see our last glimmer of life here. The morning “rush hour” as it were, people on bicycles, on foot, on the buses, heading off to school or work. The cycle of life continues in its grey existence. The airport is packed, another Air Koryo flight is to depart for Beijing before ours, and there are maybe three times as many people in the airport as it was designed to handle. On the big board, there are four outgoing flights listed for the day – two to Beijing in the morning and two to Inchon in the afternoon – what an odd sight being in Pyongyang and seeing scheduled flights to Inchon. 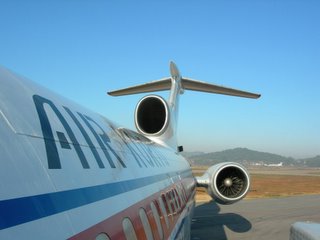 On board our Tu-154, the speakers belt out the melodious sounds of high-spirited ladies singing martial praises glorifying the Kim Il Sung. We share our flight with several Korean/Japanese tourists and a few Thai. It is crowded and loads slow, but at least I have another window seat, allowing the last few precious glimpses into life behind the veil.

As we taxi down the runway we pass several large old Russian-made helicopters parked off the taxiway. Everything around us gives the feeling of going back in time, something out of an old James Bond movie – I half expect to see Sean Connery slip out from behind a hanger and commandeer a helicopter.

Our takeoff is much smoother than on the flight in, though the snack is a “Pyongyang Burger,” a three-layer bun with spread with butter and topped with onions, a single piece of lettuce and an unidentifiable “meat” patty. The further north we fly, the higher and more denuded the mountains beneath us. Rivers wind between the peaks, dammed in some places to form reservoirs. There are small towns dotting the landscape. The stewardess explains the revolutionary aspects of the terrain, linking all back to the Great General. A land reclamation project passes below, the side of a mountain being blasted to build a plain.

The mountains seem to go on forever, undulating through a sea of clouds, fading into the mist. A stewardess pops through the curtain from “first class,” snaps a picture, and darts back into the other cabin. This repeats, until we anticipate her arrival and are prepared with awkward faces – a final and fitting ending to the bizarreness that was – and is – North Korea.

Epilogue: As we step off the plane into the Beijing airport, there is a sense of openness, and several of us utter how great it feels to be back in a place like China, where we are so free. And then we laugh at the absurdity of the statement, and I already long for another chance to enter the hermit Kingdom. 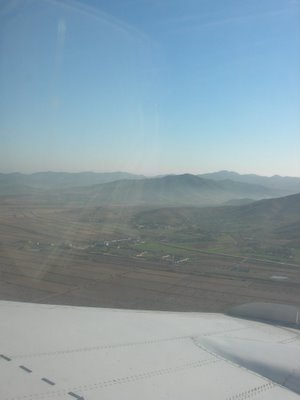