Let Us Create More Revolutionary Films Based on Socialist Life

I steal the title of this entry from the classic talk to writers and film directors delivered by Kim Jong Il in 1970. Just as exciting as the title of the article, so is a visit to North Korea’s premier movie lot. There is some sense of awe and interest in the sheer spectacle of Socialist filmography, but the excitement dies down rapidly upon seeing the lack of anything interesting. A back lot tour is dull enough in California, but in North Korea...

As we pass through the gate, we are flanked by large, pale concrete buildings, windows trimmed in white. The insides of the open doors are blue, red and white signs are placed above the doors. A monument stands ahead of us at the end of the road. We pick up another guide, this one from the studio, and move forward, admiring the large, revolutionary mosaics on the buildings.

We disembark and stand in front of a large bronze statue of Kim Il Sung, his arm wrapped gently around a smiling girl, the two flanked by other Koreans, one with a movie camera. We are told very directly that we can take pictures only AFTER we listen to the guide’s speech. Pictures are always “after the speech.” 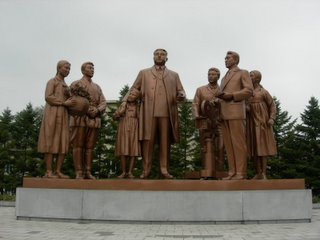 And another typical tour begins. The movie studio was founded in 1947. The first movie was completed in 1949. They have made 1000 movies. The studio was originally for army, cartoon and documentary films, but now there are three separate studios. Kim Il Sung visited the studio 40 times, Kim Jong Il visited more than 500 times (Kim Jong Il loves movies). They are now working on “Nation and Destiny.” The statue commemorates “The Flower Girl,” which won an award in Czechoslovakia in 1972 (we are somehow supposed to be impressed that it won an award in another Communist nation three decades ago – thus proving he quality of North Korean film making).

We travel through the studio to the outdoor sets. Young girls in red scarves laugh as our bus passes by, men with guns sit by the side of a building (perhaps they are just extras...). We get a brief walk at the Yi Dynasty street, one of seven streets (the others are Chinese, Japanese, European, Pre-revolutionary Farmhouse, South Korea and Mount Paekdu). As we walk back to the bus, there are several young women, their make-up thick on their faces, sweeping a graveled area near the building, apparently removing tire tracks and foot prints.

We drive the bus through the 1920s/1930s Chinese street, used to represent Manchuria during the anti-Japanese struggle. Down a windy road along a hillside, never meant for a bus the size of ours. Through a South Korean street of the 1950s, onto a 1920s/1930s Japanese street. And then off the bus and we walk down a hill to the pre-revolutionary farming village and some Yi Dynasty sets, where they are filming a movie. There we are privileged with a photo-op with costumed actors, as well as the chance to have a picture taken with the black-suited Mun Il Kwan, who supposedly is a famous North Korean movie star (though he refuses to give autographs).

Overall, the studio was unexciting, but it was somewhat fitting to be inside the place where myths are made inside a mythical kingdom. A Magic Kingdom inside the Magic Kingdom, as it were. As we drive out, the streets of the studio are not exactly crammed with Korean tourists. Even in here, by the studio buildings, there are mats of beans drying. No space is wasted at the harvest. And off we go, to the Pyongyang Metro.
at 2:04:00 PM