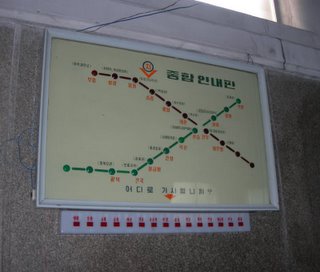 We drive from the movie studio to a Metro station, our itinerary for the afternoon, our guide says, includes the Metro, lunch, the Pueblo, the birthplace of Kim Il Sung and the Children’s Palace. I gaze out the windows again, scanning for insights into life in Pyongyang.

A small boat sits on the shore of an irrigation canal, a wire run across the water, used to pull, hand over hand, the small ferry across. By the side of the road are small, independent businesses – an old lady squats by the side of the road, her handkerchief beside her, opened slightly to reveal several boxes of foreign cigarettes, a man refilling lighters, another lady with a handkerchief filled with three types of dried beans. These, like the roadside bicycle repairman, are examples of individual free trade, the Pyongyang black market. At one point later in the trip, we see one such seller who, as security officials approach, folds up her wares and quickly disappears into a metro station.

We drive on. Soldiers ride by in a motorcycle and sidecar. Goats graze, tied up in the grass between the street and river. We pass again the guest houses for VIPs, their bright pastels contrasting with the grey so pervasive in the city. Our guide says nearly 2000 non-Koreans live in Pyongyang.

The smiling face of Kim Il Sung looks down benevolently on the people from the sides pf buildings. But of his son, Kim Jong Il, there is no sign. This, too, is part of the cult of personality the younger Kim has helped establish around his deceased (but perpetual President) father. Kim Jong Il’s legitimacy comes from his father, and as such, he must be cautious not to appear to try to surpass his father, not to supercede him.

We pass several roadside parks, many adorned with concrete animals, looking eerily like the White Witch’s courtyard in Narnia. By the side of the road a military truck stands broken down, its hood raised, the hand crank sticking out of the grill.

And we arrive at the Metro.

We visit two stations – Reconstruction Station and Glory Station – and we ride between them in the old East German used Metro cars (complete with German graffiti scratched into the windows). The usual numbers – Metro construction began in 1969, with full scale construction taking off in 1971. By 1973, two lines are complete and the Metro opens. In 1975, 17 Metro stations have been completed; nodes along the 34km of track.

The metro stations themselves are deep underground – alternative bomb shelters in case the imperialist aggressors nuke Pyongyang. The decorations are both impressive and shockingly gaudy. The mosaics on the walls are stunning, depicting historical and modern scenes of North Korea, its struggle and the people’s lives. But the chandeliers are truly the best part, looking like something rejected from a 1950s aluminum Christmas tree.

We board the first car of the arriving train, a car that is clearly for us foreigners alone at this moment. Yet one North Korean worker, perhaps from a factory, boards with us and smiles shyly. We exchange a few greetings in Korean before our third guide – the political enforcer – sits next to our uninvited guest, and his head sinks into his lap like a scolded dog. When we arrive at the next station, he shuffles off before us, not looking back.

In a naive attempt at friendly diplomacy, I ask one of the guides to see if some of the children in the Metro station want some chocolate – after all, isn’t that they way friends are made around the world? The child in question runs in terror from my guide, despite the fact that he, too, is North Korean. Is this the early signs of xenophobia, as I stand there, or are they trained early to distrust, or are they just trained to not take candy from a stranger?

As I ride the escalator back to the surface, I feel as if I am diseased or shunned – a full four steps above and below me are empty as no one stands too close to me, perhaps afraid that I will somehow infect them. 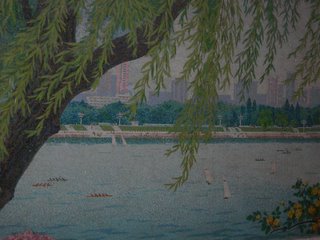