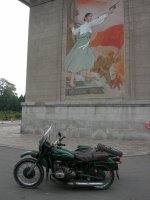 After a busy morning (still day three) it was off to lunch at the Grand Theater (better kimchi here at least) and then a drive down to the river, past a billboard advertising for Pyonghwa Auto – yes a new car advertisement – and on along streets bordered with bits of garbage and plenty of apartments under construction. And then we arrive at a set of steps that will lead down to the river.

As a score of Americans pours over the ridge and down the broad stairs to the waiting ship below, a group of North Korean tourists looks somewhat agap as perhaps their least expected moment has occurred. Nearly two dozen Americans stand facing a similar group of North Koreans next to the U.S.S. Pueblo, North Korea’s trophy capture and the destination of this phase of a busy day. (For information about the Pueblo, I recommend you visit usspueblo.org run by the Pueblo Veteran’s Association.)

Our tour guide, it turns out, is Kim Jung Rok, who, it seems was part of the boarding party that took the Pueblo. He stands in his dark uniform, his chest covered in campaign ribbons, under his Kim Il Sung badge, his wrinkled face under a shining white hat with black brim. He exudes pride; pride in his job, pride in his place in history and pride in his privilege to share his story and view with Americans on this day. It is a moment that, whatever your ideology, you realize that a veteran is a veteran. 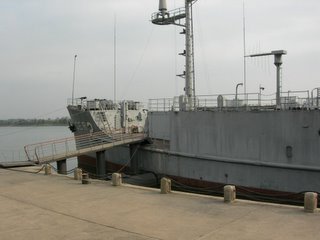 Then we are reminded we are in North Korea again. The tour begins with the “invasion” of the “pirate ship” General Sherman in 1866 (see the Secretary of the Navy report from 1867). The General Sherman, we are told, was the first ship from America to invade North Korea, but certainly not the last. It was sunk by “our people,” the guide says, and then informs us that the citizens who attacked the general Sherman to defend Korea were led by none other than the great grandfather of Kim Il Sung himself!

We are sat in front of a television in the ships galley and watch a propaganda film, loaded with glorious images reminiscent of a 1950’s cold war movie shown in elementary school to ward us of impending war with the Soviets. The music matches. The narrator, with an accent more reminiscent of the comic French English of Peter Sellers than the English-speaking North Korean it is, draws us into the story of the “Pueblo armed spy ship of the U.S. imperialist aggression forces.” The ship had a crew of 83 with six officers when captured, one American dies in the capture.

My attention wanes as a mosquito drones around my ear. There appear to be parts of the wall rebuilt with fiberglass. The interior is relatively well maintained. “...the brazen-faced U.S. imperialists...” It is interesting that the video credits Kim Jong Il with handling the negotiations at the time – in 1968. “...the enemy kneeled down before the Korean people and made an apology...” A flag-draped coffin flashes across the screen – the one American who dies in the action. “...the U.S. imperialists who kneeled down before the Korean People are now running on down hill...” 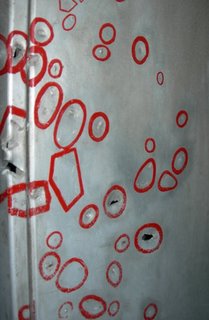 And we take the tour. Through the officers mess. Past the damage from the action (the scarred metal is marked with red circles to highlight where damage occurred). We see the Pueblo’s flag, a copy of the letter to Truman, other items of interest. And then it is story time again, as we stand in and around the bridge. When the north Koreans captured the Pueblo’s captain, we are told, communication between the Koreans and Americans was poor. So the North Koreans drew a picture of a big-nosed man, and made a questioning gesture. The American wrote the number 83 (83 members of the crew). The Koreans draw an eagle, the American wrote a “6” (six officers).

And again we are told that the Koreans are so proud of Kim Il Sung and Kim Jong il for capturing the Pueblo, the only instance that a boat of seven soldiers captures a ship with a crew of 83. Given that our guide was part of the seven that boarded the Pueblo (from their 12 person missile boat), one would think HE would remember that neither Kim Jong Il nor Kim Il Sung were actually there with him, but... 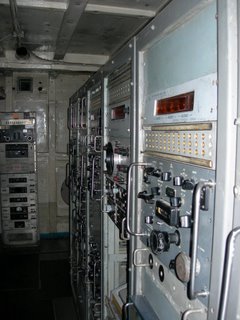 As we finish up, the bright red Honda generator seems a little out of character for a 1960s U.S. ship in a North Korean river.

I have mixed feelings about my tour of the Pueblo. On the one hand, it is simply a trophy of a bygone conflict, on the other, here I am standing with one of the Koreans who actually took part in the action – not exactly bygone. Here, he is a hero, in America, he is a villain and a pirate. Having met Commander Pete Bucher in the past, I stand here where he defended his ship, and smirk as I remember his story of his “admission” of guilt, and his offering to paean Kim Il Sung, paean the North Korean military... (pronunciation being “pee on,” the word being one he said he heard as a child in a radio commercial for ice cream). 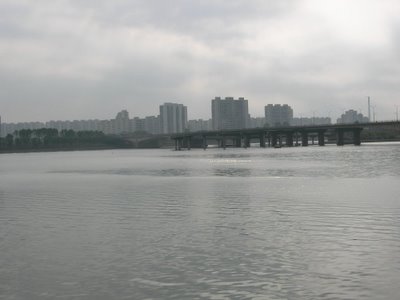