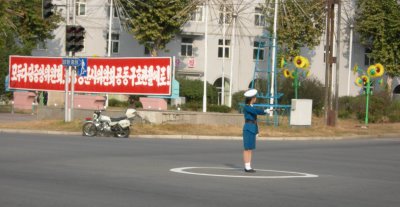 We leave for another “shopping” stop. Past a yogurt stand. Several ladies chatting together, squatting by the side of the road, their kids playing ball nearby. And on to the shopping stop, next to the comedy club. Same old same old. Nothing new or particularly interesting – all the shopping areas for the foreign tourists are the same. I really want to visit a clothing store, get me one of those vinalon jumpsuits, but not a chance.

Back outside, we beg and plead until the guide acquiesces – he lets us run down to the end of the block to shoot pictures of the traffic lady! Suddenly a dozen westerners start running full speed down the sidewalk, cameras swinging around our necks. The North Korean pedestrians look shocked and confused as we run by. What thoughts go through their heads?! 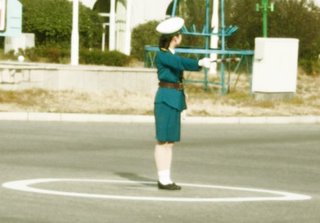 And we start shooting picture after picture of the blue-skirted traffic lady, pirouetting robotically in the middle of the road, waving her baton at the few passing cars. The rhythmic motions, crisp in the starched blue uniform, hold our attention. And then, across the street, around the corner come dozens of uniformed soldiers, marching double-time, singing out a cadence. They round the corner, look across the street and lose their place briefly, as they see all of us standing opposite them, cameras raised, no guides in sight.

Down they go into the underground street crossing as our guides run up to us, shouting “Let’s go, quickly!” And we reluctantly follow them back to the bus as the soldiers emerge on our side of the street, marching directly to a night at the comedy club. This was our moment of freedom and excitement. It is over quickly but there was the brief exhilaration of being given permission to do the impermissible.

And the moment passes as we are loaded up on the bus and head off to Manyongdae, the birthplace of Kim Il Sung. Out the windows, Ajumas and Halmonis walk with brightly wrapped bundles balanced on their heads. Children run in and out of the street with no apparent sense of danger. Antique Russian tractors pull half-empty wagons, with small loads of cabbages stacked in back, hidden behind the smoke billowing from the tractor.

We cross the Taedong and Potong Rivers and past the Ryanggang Hotel where the rivers meet (there is a revolving restaurant on top, we are told). Past the sports complex, gymnasiums and stadiums. We are told that we are 40km from the ocean via the river. And now we find ourselves stuck in traffic, following a tractor hauling a load of dirt, and then we arrive at Mangyongdae.

A brief addendum – always have at least two cameras, extra film, and extra batteries. I lost a section of the trip at one point when my digital ran out of batteries, but covered with the manual camera. I lost another part when the photo lab lost a roll of film from the manual camera, but covered with the digital. But both led to missed moments, memories and opportunities. All my close-ups of the traffic lady disappeared into the photo-processing black hole...
at 12:34:00 PM