Beijing Rolls Out New Technology in War Against Spitting People 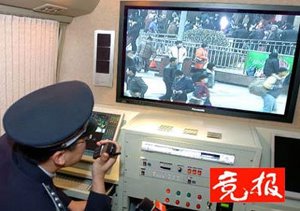 Beijing has been ramping up its anti-spitting campaign for quite a while now, but there is a particular earnestness as the 2008 Olympics near. Chinese authorities want to clean up the image of the city, and having tourists and Olympians seeing everyone from the factory worker to the grandmother to the petite young college coed hocking up big lugies is not the image of a refined 5000-year-old civilization China wants to present.

Now, the signs and advertisements pleading with residents to stop spitting have amounted to nothing. Perhaps it is because the air in Beijing is un-breathable, and the only way to not choke to death on the morning commute is to continuously expectorate. Or perhaps it has just become an element of the local culture – New Yorkers are rude, Beijingers spit.

But Beijing is now going high-tech in the War Against Spitting People (WASP), deploying a $125,000 camera-equipped vehicle capable of catching spitters on tape day or night, and thereby giving enforcement officials all the evidence they need to guarantee the offenders have to fork over the $2.50 fine. After 50,000 spitters fined, they will have recouped the vehicle cost (not counting operation, maintenance, tapes, fuel, salaries of officers...).

And they are off to a good start. On the first full day in operation on the Dongcheng District Feb. 24, after a 10 hour operation involving the crew of the surveillance vehicle and beat cops, they had caught a total of NINE evil, vile, Communist spitters (oh wait, they are all communist...). At that rate, they will capture and fine enough spitters to repay the spit-mobile in just 5555 and a half days, or just over 15 years.
at 12:02:00 AM