Message In A Mao Visit 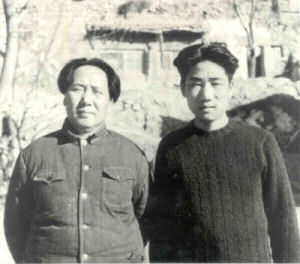 Mao Anying's family and relatives have left North Korea, and with their departure, the subtext of their visit continues to percolate in Pyongyang.

Mao Anying, son of Mao Zedong, was killed in North Korea in November 1950. He has since been revered by North Korea as a martyr, and a sign of the true blood-relation between China and North Korea. Mao’s words at the loss of his son were reportedly "In war there must be sacrifice. Without sacrifices there will be no victory. To sacrifice my son or other people's sons are just the same. There are no parents in the world who do not treasure their children. But please do not feel sad on my behalf, because this is something entirely unpredictable."

The visit of Mao Anying's family to North Korea is apparently a first, at least as far as the KCNA has bothered to publish about in recent times. For a relationship filled with symbolism and important dates, sending Mao Anying's family in May seems a bit odd. June will mark the anniversary of the start of the Korean War, July marks its conclusion, October is the Chinese intervention and November was Mao Anying's death.

The symbolism of the visit, then, is not necessarily about the dates as much as it is about the perceived sacrifice. Mao Anying's participation in the Korean War reflected the oft-repeated mantra of Chinese/North Korean relations being "as close as lips and teeth." While this has come to reflect the commitment between the two nations, the origin of the phrase included a second line - "when the lips are gone the teeth get cold," a clear Chinese notion that its participation in the Korean War was much less about fraternal ties with North Korea than it was about protecting the Chinese frontier.

China is now facing an internal crisis, one that is shaking the very core of the Communist Party and threatening to fracture the nation as has happened so many times before throughout history. Even if one doesn't take as dire a view of China, it is clear that economic and social inconsistencies threatens the stability of the state, and Beijing’s number one concern is internal cohesion. In that sense, North Korea has been a mixed blessing. On the one hand, as long as China can show it is useful to the United States in dealing with North Korea (hosting the six-party talks, for example), it can buy space and time from Washington, allowing greater resources for dealing with internal issues. But North Korea has also become a grain of sand under the Chinese eyelid - Washington has placed China's handling of North Korea as a key criteria for how the united States deals with China, and Pyongyang exploits this Chinese problem.

Beijing has now, through Mao Anying's family, reminded Pyongyang that China will protect North Korea in times of war with the United States. This is part of the "security guarantee" that Pyongyang has demanded as part of the nuclear resolution. This also clears up some concerns in North Korea about rumors in recent years that, in case of a conflict on the Korean Peninsula, China would intervene and essentially create a protectorate of North Korea (all the Koguryo hype was part of this).

But the visit is also a reminder that Beijing will only intervene if it views its own interests threatened. If North Korea doesn't get back into the talks, China may determine Pyongyang is more of a detriment than a benefit, and if that were the case, intervention would take on a whole new color.

North Korea's leadership is discussing this, and the recent hint from Washington that another North Korean demand, that of a peace mechanism to replace the 1953 Armistice, could be met in talks if they are restarted soon, is playing into the discussions. For Pyongyang, the pressure from China is increasing, the carrots from Washington are dangling, and relations with South Korea... well, they remain the North's ace in the hole.
at 12:40:00 PM

You have to respect it when a head of state sends his own children to war, rather than just other peoples' children -- even when the head of state is named Mao. BTW, do you know where the cave-dwelling backdrop of that father-son photo is?