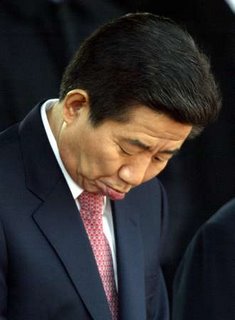 South Koreans rank low in National Pride. Or at least that's what the "National Pride in Cross-national and Temporal Perspective" (PDF version) research report from the University of Chicago noted this spring. The report, published in the International Journal of Public Opinion Research, discusses both "General National Pride" and "Domain Specific National Pride." In both cases, the report notes that National Pride is different than Patriotism or Nationalism (and this can be readily seen from the way in which the questions are phrased).

When I first saw the news reports that ranked South Korea number 22 out of 33 nations for National Pride, I was rather confused. This is the nation that has taken nationalism to new heights of silliness, like the bee-man Tokdo protestor, harbored a four-year grudge against a U.S. speed skater (issuing threatening letters as well) until getting "revenge" at the 2006 Olympics (a somewhat unsatisfactory victory, apparently, because Ohno didn't compete in the final round of one key event), a nation that refuses to eat foreign rice, that virulently protects its domestic movie industry while surging a Korean Wave abroad, a nation that holds on to its history like few others, a place where half-Koreans are only now gaining a bit of acceptance (and that only after a Korean-American won the MVP in the Superbowl), a country that cheered when Carrefour and Wal-Mart failed to make it in the Korean marketplace, a place where the government sponsors searches over the entire internet for "factual errors" about Korea (like calling the East Sea the Sea of Japan or mentioning Korean dog-eating in a dispariging way)... well, you get the point.

Korea is the epitome of a nationalistic nation. Or so it would seem. Koreans will violently defend their nation against any perceived external slight or insult, against any percieved encroachment on tradition or territory. But candidly, at least by this survey, they are much less in love with their country. And if you have ever interacted for long with a Korean, you will realize the amount of pent-up (and occasionally un-pent) frustration and anger with their own government, system and even society.

The questions asked in the survey were as follows:

A. General National Pride
How much do you agree or disagree with the following statements?
Strongly Agree/Agree/Neither Agree nor Disagree/Disagree/Strongly Disagree

In the first part (General National Pride), South Korea fairs relatively well, coming in 16th overall with a score of 16. When checked against various groups within the country, older Koreans put the number much higher, as do the less educated and those from the Honam (Cholla) region (something interesting in itself, given the long sense of abuse felt in Honam, though that may account for the region's higher sense of pride and defense of Korea's perceived place in the world).

On the second half, Domain-Specific National Pride, Korea does rather poorly, coming in tied with West Germany and Latvia (all three rating just 1 out of a possible 4) and barely rising above Taiwan, Poland and the bottom-rung East Germany (The two Germanies are divided for the survey to give continuity to a previous survey).

Koreans may be nationalistic, and they may be willing to cover themselves with tens of thousands of bees to show their national fervor, but when it comes down to it, they remain a rather dissatisfied lot, at least with their government and social achievements.

This is reflected in their elections, where political parties rise and fall with a stunning rapidity, where support can be turned to anger at the drop of a hat (or the drop of a sexist remark) and gained back just as rapidly with a facial wound, and where Presidents find themselves lame ducks half way through their administrations, with their own parties turning their backs on them.

It is also reflected in the power (and vagaries) of the civic groups that blacklist politicians, seek out corruption (occasionally getting caught themselves) and create support networks that will do anything from candlelight vigils to attacking those who say "rude" things about disgraced scientists who fake their results. And this sense of civic group power even slips into the realm of the bizarre, with massive e-mail and web attacks against pop-stars who are seen as going a little too far insulting other pop-stars in variety shows like SBS's X-Men (an interesting description of the show, if you havent seen it, is on the Big Apple Blog).

It will be interesting to watch these rejectionist politics in motion as Korea votes in local elections today, and the contrasting nationalistic fervor that will be shown over the weekend as the World Cup is about to begin. While the University of Chicago survey may not be an accurate reflection of Korean opinions, it does force us amateur pop-sociologists to take a closer look at the cultures we watch, and not simply reach for the simplistic moniker "nationalistic."
at 1:33:00 PM

Seems like the ultranationalist displays we see regularly, such as bee-covering and finger-chopping, are a means of channeling anger brought about by their inferiority complex?

This is really interesting. I just had a friend visit from Korea. She said that if she had told her friends that one of her best friends (my wife) was Japanese, she would be ostracized.

Meh. Nothing we can do about it anyway except wait.