The stand-off at the POSCO headquarters in Pohang continues. Construction workers, employed by subcontractors to POSCO, occupied the building a week ago after they accused POSCO of supplying replacement workers to the subcontractors and thereby undermining their bargaining position in labor disputes. Police raided the POSCO headquarters to throw the strikers out, cleaned out the first three floors, but were greeted from the upper floors with a barrage of hot water, garbage and home-made flamethrowers. A second raid on the building is likely. 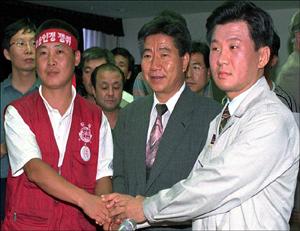 Strikes in South Korea are on the rise once again, not only the seasonal summer rise, but an overall increase. And the violence is increasing as well. It is somewhat ironic that these types of strikes are occurring under the Roh Moo Hyun government, given Roh's earlier career as a labor lawyer and his role as a mediator in the 1998 Hyundai strike, where union workers barricaded themselves and their families in the Ulsan facility and surrounded themselves with natural gas canisters and a tanker truck full of petrol to dissuade the police from storming the facilities. (The image from BBC is of Roh, labor and management at Ulsan in August 1998 as they worked toward a settlement that ultimately satisfied no one.)

Where is Roh now? He is certainly not intervening, even as a major Korean firm gets beset with the troubles of its subcontractors. [UPDATE: There is some movement toward intervention. The government has offered to mediate if the strikers leave POSCO headquarters] Former President Kim Dae Jung used the 1997 Asian financial crisis to reduce the power of the Chaebol, and began to crack the back of organized labor. Roh's government continues to strike out at the Chaebol (selectively, but then Kim was selective in his approach after the initial round of hammering the conglomerates), and it has taken a strong stance against broad-scale labor movements in previous years, but this summer it seems to be taking more of a back seat – all as South Korea's economy seems to be slowing again.

From a business perspective, this is trouble, as South Korea's unions are still seen as a drag on economic growth and expansion. Companies encounter stiff resistance for plans to hire part-time or hourly labor, unions remain linked across industry, causing unexpected sympathy strikes, and the international trend of outsourcing and moving industry to cheaper labor markets meets with increasing opposition at home. On the other hand, Labor doesn't see their needs being met yet, either. The five-day work week is still far from being fully implemented, there are too many educated Koreans for the workforce to absorb, and fears of outsourcing are growing.

Given his background, one would think Roh would at some point intervene to broker a new understanding between labor and industry. Yet the tripartite talks remain stagnated, and Roh is focusing instead on the military armament of South Korea. Ironic that the labor advocate now ignores labor and builds up the military-industrial complex, all while clamping down on any voice of dissent.

Roh is seeking a legacy, but it is not one of liberal reform. His path is running parallel to that of Japan's Junichiro Koizumi, whose "lion's mane" hair and wild ideas of economic and political reform have masked his deep-seated nationalism, where his real focus has been on the military revival of Japan. Roh, too, has come under the cover of civic leadership, only to reveal his true focus – strong nationalism; working toward a military equal to the sentiment. The competition is fierce, the tensions mounting, and Northeast Asia is shaping up into a region where traditional rivalries and common verbal exchanges could one day in the not too distant future suddenly explode into much more.
at 12:07:00 PM