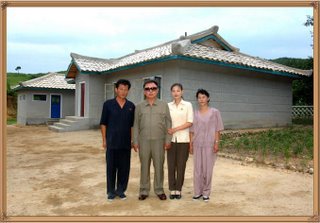 Kim Jong Il made his first public appearance since July 4, visiting the breeding farms of KPA Unit 757 August 13. Kim visited a rabbit farm and a goat farm, met with one Yun Ho Jung who cared for the rabbits for years, and urged raising more rabbits, goats and other grass eating animals in North Korea's many mountains.

Kim was not alone visiting the KPA farm. He was accompanied by three KPA generals (Ri Myong Su, Hyon Chol Hae and Pak Jae Gyong) two First Vice Department Directors of the Central Committee (CC) of the Workers Party of Korea (WPK) (Ri Je Gang and Ri Jae Il) and one Vice Department Director of the CC of the WPK (Hwang Pyong So).

This was Ri Myong Su's and Pak Jae Gyong's 28th appearances with Kim this year, Hyon Chol Hae's 27th appearance, Ri Je Gang's eighth appearance, Ri Jae Il's 16th appearance, and Hwang Pyong So's 33rd appearance. In other words, Kim neither made the visit alone, nor in an unusual manner. He was accompanied by people who had made similar inspection trips throughout the year. The message is that there is clear continuity, both in the KPA and the WPK.

In the coming weeks, the outcome of Kim's absence will begin to reveal itself in the actions and comments of the North Koreans, and in the actions of the Chinese, South Koreans and Russians.