October 20, 2006. I left behind the muddy waters of Texas lake diving for the blue of Thailand. The taxi picks me up at 5 AM, a thin crescent moon smiles down wanly on the cab as it passes through the streets of Bangkok. Two motorcycles, police lights flashing, escort a minivan racing through the streets. "Embassy," says the driver, refering to the minivan, before muttering, "Police in Thailand no good. Taxi, TukTuk, much money. No good."

We drive on, the sky lightens as we, revealing palm trees, silhouetted like the shadows of fireworks frozen mid explosion. A mountain rises ahead, green-grey in the morning mist. We skirt around its edge, the road spotted with billboards advertising the Pattaya outlet mall, and with small restaurants, eating stands with tin-covered patios. The high peaked roof of a temple, under construction, breaks through the canopy, the framework for future peaks arrayed like a spider web, mirroring the lines of the main structure.

The sky lightens more. Pale peach blending into turquoise blue. Thai pop music on the radio, the singer occasionally breaking into English strains, insisting he "needs somebody." Mountains in the distance, mist-shrouded palms closer to the road, a Jurassic Park landscape. The hot-pink sun pushes over the ridge-top, straining against the veil of mist. Robed monks walk along, pausing for prayers and their daily collection of breakfast. The temples nearby are ornate; multiple peaks, curving upwards, white and gold fire reaching toward heaven.

Pattaya. The Ronald McDonald statue, hands folded in his Thai greeting, stands before the burger joint, welcoming customers. A quick breakfast at a mini-mart, and off to find the pier. The international meeting street, where last night's drunks wander today's streets and a few early… ladies… offer unspeakable services (though they speak quite openly about them). As you near the pier, trees and flowers replace the bars, the smell of the sea blows away the smell of stale beer.

On board, and off to the islands for some diving. The conditions were not as clear as I expected, but there was abundant life, and yes, I finally got to see a shark while diving (but only a little bamboo shark, maybe as long as my leg, lounging under the coral). The water on the two drift dives was not exactly crystal clear, but there was plenty to see, from corals and sponges to anemones to fish and eels, nudibranchs and sea cucumbers, and the occasional jelly fish. On the second dive, we came up and the boat was not to be seen. We were near the island, so there wasn’t too much to worry about, aside from the rapidly darkening sky and lightening in the afternoon thunderstorm bearing down on us. The boat came around the bend in the island, and we got on board a minute before the clouds let loose with a drenching downpour – natures fresh water rinse as it were.

The bus ride back was long and slow – no wonder it is only 121 Baht (less than four bucks). Had it not been dark, and everyone trying to sleep the trip, it may have been an interesting way to meet people. But instead it was just uncomfortable, and to top it off, my shoes were soaked from the rain. Ah well. The sky train is nice, and much better than the taxi drivers who offer you a ride without the meter for 100 baht (with the meter it would be more like 50).

Tonight (Oct. 21) there is something going on. The sounds of explosions echoed off of the buildings. My first thought was a counter-coup. But it turned out to be fireworks. Low, bright and loud. The smell of the gunpowder in the air. But the food at the Shinla Korean restaurant nearby is quite good. 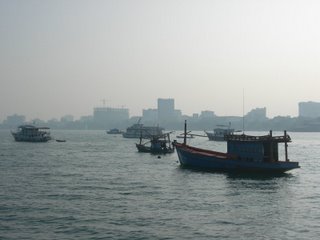 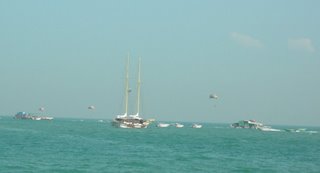 In the bay. Note the numerous parasails as well. Thick like kites on Tienanmen Square. 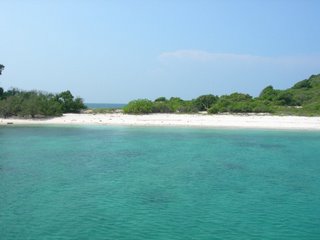 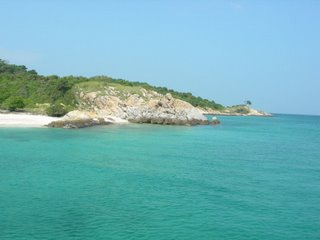 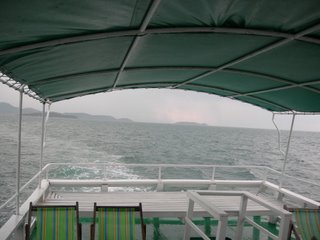 A view back at the distant rain. 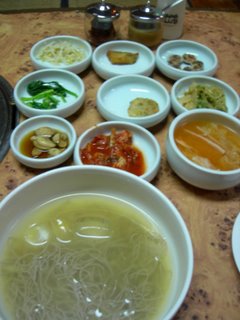