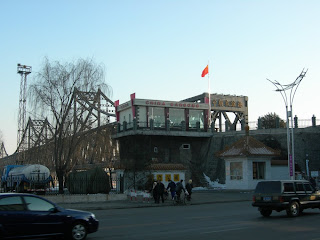 The main bridge over the between ’s and ’s was surprisingly busy. There was at least one train a day (maybe one going each direction – I didn’t sit by the bridge all day), and there were vehicles moving fairly regularly across (a few an hour during mid day). There was also a little foot traffic. Most traffic, car or foot, was traveling to rather than to . In addition to cargo trucks, there were the occasional van or sedan, and even a couple of brand new SUVs, one towing the other. Perhaps early birthday gifts for the Dear Leader... 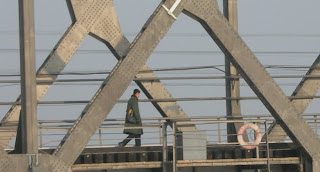 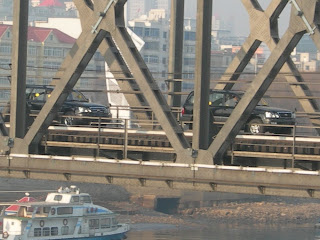 There is a general disdain on the Chinese side for their North Korean counterparts, at least this was the perception from the Chinese I spent time with. A composite description of the various folks I spent time with: in import-export between China and the two Koreas, a Korean language major who did a year at Kim Il Sung University, and spent time working and living in both North and South Korea, a former official of the Railways Ministry, traveled several times into North Korea, arranged visits of Chinese officials or tourists to the DPRK.

The general view was that North Korea is mismanaged, prices are too high (apparently two tiny pieces of tofu without sauce cost a dollar), and the security apparatus is brutal with returned North Koreans caught on the Chinese side of the river. The one, who has traveled all over North Korea and stayed in several cities, found the country drab and depressing, and on one extended stay was depressed nearly to the point of suicide (an exaggeration, likely, but certainly a reflection of the “grayness” of North Korea in color and mood).

There were also several stories of clashes or near clashes between Chinese and North Korean soldiers over farmers and other civilians crossing over the river to one side or the other. Chinese farmers apparently crossed over once in a group to start cultivating North Korean land, the North Koreans have done similar things. In addition, several decades ago, expelled many of the Chinese-Koreans to . In the ousting, they refused to pay cash for the confiscated property, and instead gave commodities in kind. Some got a few thousand pairs of shoes, others a dozen washing machines. Of course, as they crossed into , these were confiscated by customs.

It is not a longstanding relationship of mutual trust, shared experience fighting the “American aggressors” notwithstanding.

Where the North Koreans do fit in , at least in the more obvious ways, are in the North Korean restaurants. There, to make the wait staff feel more comfortable, my Chinese friends told them I was Dutch, not American. That loosened up the mood a bit. After much cajoling, two of the waitresses came in, one with a guitar, the other with the quintessential North Korean accordion, and sang us three songs, two Korean, one Chinese. This is where they have a role. After years of foreign language study in the tourism or language universities, they become performing waitresses for Chinese businessmen. 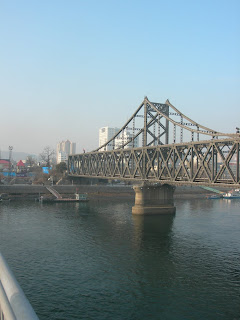