Keeping with my winter activities in China, upon arriving in Shenyang (and having a wonderful lunch), it was off to the Shenyang (Shenjing) Imperial Palace (Here is a description from China.org). Notable in the fading evening sun was the difference in the use of colors - more blue and green than in the Forbidden City in Beijing. Also interesting was that more of the buildings were two-storey and brick, not all the plastered-over red stucco. Walking around, it seemed half the palace complex was for the various concubines, with various examples of concubine bedrooms and sitting rooms preserved in the frigid buildings. 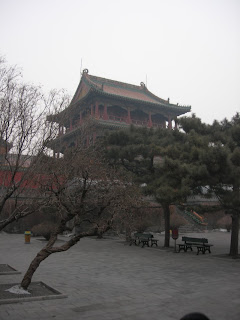 After a tour of the palace, it was off for dinner, and then off to a Shenyang/Liaoning style variety show - a series of variations on the same theme of a comedian guy and a dancing/singing girl with various comedy, martial arts, dancing and singing routines (including one where they played a sort of flute or clarinet connected to long rubber tubes - which in turn were connected to their nostrils...) Even with minimal understanding of the exact words, the concepts came across very clearly. After about six variations by different two-person teams, though, it was time to call it an evening. 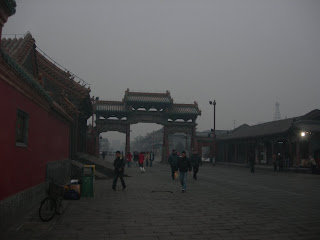 The next day, while wandering Shenyang (another city showing signs of rapid growth and construction, or rather than growth, perhaps rebirth of the former core of the current rust belt of North China) I watched the kids (and adults!) playing on the iced-over river. Skating on chairs and spinning tops (keeping them going with a whip) were the games of choice. In other parts of North China during my tour there were lots of places where the snow was cleared off the frozen rivers and they became entertainment complexes. One even had a figure-8 track set up for the ice skaters. 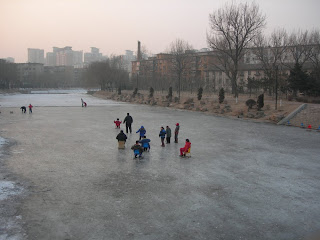 While in Shenyang, the local provincial government and party meetings were taking place. Outside the main hall where they were meeting, dozens of police vans were parked - with the officers snug in the heated vans. Only a few officers stood on the sidewalk out front. Small knots of seniors gathered around, the only ones interested or brave enough to bring their concerns and complaints to the government meeting. One elderly gentleman was displaying a banner with his concerns written out, while the officers gently tried to convince him to put it away. While they are not always so restrained, in this case there seemed more a frustration with his disturbing the sense of order than any real anger at his complaints or his decision to bring them out in the open.

In general in Shenyang, and even in Beijing this time, there was a lot of police activity. But normal police activity - stopping cars going the wrong way down one-way roads, pulling over speeders, fining people for not wearing seat belts, dealing with disputes between taxi drivers and their fares... in general a sense that public security workers were more interested in rule of law than rule of intimidation. Whether this is something new, something about winter, or just something that I have finally noticed I do not know, but it was interesting to see the active role of the police all over the major cities - and all in basic "police" enforcement functions.
at 4:41:00 AM