What Does Kim Jong Il Do in December?

Kim's public appearances by year for the month of December (2007 runs through Dec. 19) 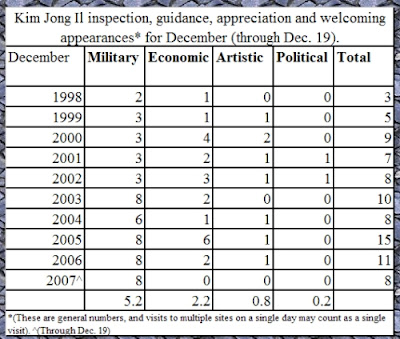 North Korean leader Kim Jong Il has paid 8 visits to military units this December (up through December 19), and on nearly all occasion Kim was accompanied by KPA Generals Hyon Chol Hae and Ri Myong Su, who are frequently seen on Kim’s inspection trips.

In terms of other guidance or "appreciation" or artistic performances, Kim was particularly active in economic guidance in December 2005 (six visits) and 2000 (four visits). He has made no economic visits this December (barring a visit to a military-run cotton production unit on December 6). In 2001 and 2002, Kim met with Russian officials in December, but aside from that, his diplomatic calendar is usually quiet at the end of the year.