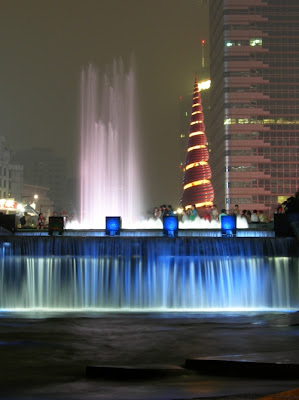 's opposition Grand National Party (GNP) candidate Lee Myung Bak appears set to clinch the presidency, with most exit polls giving him just over 50 percent of the vote. Lee's victory is less one of "conservatives" over "liberals," though, that a combination of factors ranging from the moderation of political extremes by the main parties, a maturing of 's democratic process and a shift to a more internal-focused campaign, rather than one driven by foreign relations and highly charged nationalism.

For a year or so, both the GNP and the pro-government parties (whatever their chosen name at any given moment) have been sliding to the center, a pattern being seen in the lead up to ’s elections and even seen in Japanese politics recently. In , the move is part of the maturing of the democratic process. Kim Dae Jung won the election in 1997 in what was largely a rejectionist vote against the old-guard forces in . Roh Moo Hyun pulled off his victory riding a surge in Korean nationalism manifest as anti-Americanism. Neither of these played well this year. (It was barely even mentioned that Lee wasn't even born in South Korea)

Some of Lee's support was certainly a rejection of what many see as a decade of mismanagement or missed opportunities by the "liberal" political leadership (even if Kim Dae Jung pulled the country rapidly out of the Asian economic crisis). But there was also a look to internal economic and social policies, and Lee apparently had the most clearly defined (even if they include a canal).

The near lack of foreign policy, and particularly of disagreements over relations with the , is also telling of a shift in South Korean thinking. The generation that cheered Kim Dae Jung's victory and brought Roh Moo Hyun to power is maturing, and recognizes that cannot just go it alone, that needs to manage its relationship with , not just insist on going its own way. While there is no desire to become a puppet of the , there I a need to avoid being abandoned by , both for security and economic reasons.

On a side note, Koreans are also getting a bit bored with elections, relatively peaking. Voter turnout this time was 62.9 percent, according to the National Election Commission, down from 70.8 percent in 2002 and 80.7 percent in 1997. Democracy is settling in, and so is apathy and ennui. Ah, the freedom not to choose...