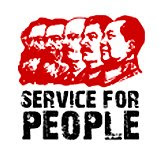 China’s official Xinhua news agency has run an article, reprinted in the English language China Daily and the People's Daily, discussing the merits and problems of one of the latest in Cultural Revolution Chic theme restaurants in Beijing, the Red Flag Fluttering, in the Daxing district of Beijing.

When I saw the article, two things struck me. First, Red Flag Waving seems to be a knock-off of The East Is Red, which is located east of in Dongwuhuan. I visited East Is Red back in July 2007, and what a show it was. The Cultural Revolution meets Andrew Lloyd Weber, complete with keyboard and rifle-waving girls in drab. One wall even had one of those famous red famous tractors busted through the brick, and the performers mounted the disused vehicle to create a still-life that may as well have been a propaganda poster scene. No pictures allowed there, but I have one below, and there is a tiny YouTube snippet as well, though it isn't mine.

But aside from thinking that Red Flag Waving is just a knock-off of the always-packed East Is Red (showcasing the entrepreneurial spirit of the Chinese, ready to fly with whatever idea works to make a buck... or yuan), the most striking thing was the more open discussion of the Cultural Revolution. The current leadership is the CR generation. They were the sent down students, and they are now exerting their influence and power across the nation. They are also flirting with a more open discussion of just what happened during the CR, of the failure of the Chinese leadership (and the Party itself), and the significant damage all of this caused.

That is allowing open criticism, and that is, in some ways, good and cathartic for the Chinese. Living with pent-up anger and frustration at the delays and damage of the CR certainly affects several of my Chinese acquaintances, some of whom more recently have begun talking about the CR time (and not without some twinge of pain in their voices). One recounted how their teachers were locked up, and some of the older teachers, so confused and upset about what was happening, simply beat themselves to death by steadily pounding their own heads into the concrete wall of their school where they had been locked up. Another complained about the delay in education, and bemoaned the problems the CR caused for 's development as a whole.

But as the Xinhua article notes, not everyone is ready to talk about the CR, or at least not openly. And certainly not everyone is prepared to let it go, to take a few liberties with the past and revive some of the perhaps fond memories there were. And there seems to have been some. At East Is Red, the audience of 40- and 50-somethings sing along lustily with the CR songs, waving their red flags and raising their beers. And there was a sense of Chinese doing their own thing, of self reliance and national mobilization that is so anathema to the current self-focused race to economic wealth.

So the question I have is – of the CR becomes more acceptable to talk about (and exploit for economic gain), then perhaps we are less than a generation away from the ability of the Chinese to address as well... 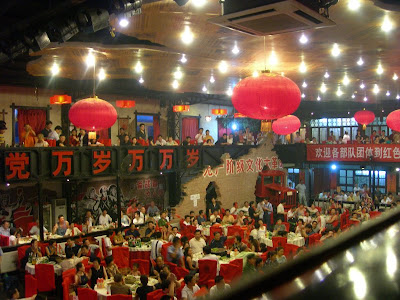 A snippet of video from the show at The East Is Red, from YouTube.